My Luggage Met Its Waterloo 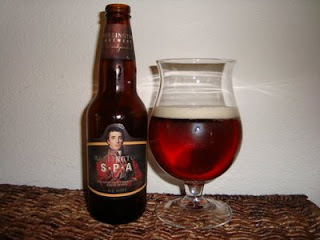 I spend a few weeks a year travelling for my job selling optical test and measurement equipment, and take time out when I can to get some runs in and sample some of the local beers. This sometimes creates an awkward travelling road show consisting of sweaty clothes, bottles of beer, and delicate optical test equipment I carry around from city to city in my luggage. I have a system to wrap socks around bottles of beer to protect them from damage for the plane trip home. And yes, sometimes fine bottles of craft beer are tucked away in particularly noxious socks worn previously in a long run. But the system works, and I've brought home over a case of beer this way with no problems. I often place the sock entombed bottles in a zip lock bag, just in case they break open. Since that's never happened, I didn't bother with the zip lock bags for the return trip home last week with the beer I picked up in Canada.

I bet you figured out what happened. I get home, and half of my luggage is drenched with a bottle that popped open on the way back. Luckily the damage wasn't so bad, and surprisingly few clothes were wet, and all of them look like they will be salvaged.
The bottle that drenched my luggage was a Special Pale Ale, from Wellington County Brewery in Guelph, Ontario Canada. Wellington Brewery is named after Arthur Wellesley, the First Duke of Wellington, who is best known for defeating Napoleon's French forces in the Battle of Waterloo in 1815. Less well known that as Prime Minister of England 15 years later, his government passed the Beerhouse Act, which greatly relaxed government restrictions on production and sales of beer. For a small fee, any residence could start brewing and selling beer, leading to an explosion of small pubs taverns popping up all over England. So you might say, the First Duke of Wellington was an early champion of beer.
Well, not exactly. The Beerhouse Act of 1830 was actually a back handed attempt to suppress English gin houses, which were viewed at the time as hot beds of sin. In the early 1800's, beer was considered a healthful drink. Children were often served small beer, or beer with low alcohol levels (usually about 3%), which actually was a good alternative to most local water supplies of the era, which were generally not potable. The Duke of Wellington was more interested in weaning the public off of the demon gin, than promoting diversity of beer production.
Approximately 25,000 licenses were granted under this act, but over time, the English Government either repealed provision of the Beerhouse Act, or passed additional regulations on beer. The last remnants of the Act were repealed in 1993. You can still find pubs in the middle of residential neighborhoods in England, products of the Beerhouse Act of 1830 which have survived to this day.
I'm glad the other five bottles of the six-pack survived, because I'm enjoying this one. It's a slightly rich, caramel brew with an slight, earthy hop background. A little creamy mouthfeel, and at 4.5% ABV, it's not going to slow you down too much. Just a good, smooth easy drinking beer with some character. Good for celebrating major decisive battles, or little things, like when everything in your luggage gets home all in one piece.
at May 18, 2009