Looking for it in the wrong place 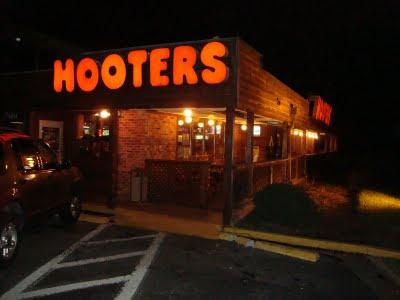 At night on a sales trip, I fly into Dulles Airport from Boston and check into my hotel in Fairfax, VA. It's almost ten o'clock, and everything else around the hotel is closed, except for the Hooter's across the street. It's been over twenty years since I set foot into a Hooter's, but it in a flash of twisted logic, I figure they might have some local beer on tap or in bottles. Not ready to crash in my room, I mosey across the street to see what's on tap.

Of course, you're probably thinking I'm really going for something else besides the beer. But I've found good craft beer selections in unlikely places like dingy airport bars, squeaky-clean suburban convenience stores, and dilapidated liquor stores that one would otherwise assume specialize in 40 oncers of malt liquor to be consumed immediately outside from a paper bag. So maybe craft beer has arrived at Hooter's. Then again, Hooter's is not exactly one of the more progressive organization in the world, so if you're snickering at me for claiming I'm going to Hooter's for the beer, well you have a point.

The best they could muster was Sam Adam's Boston Lager. They were sold out of Sam Adam's Octoberfest. The closest thing they had to a local brewery was Yuengling on tap, even though my waitress couldn't pronounce it right. Sorry, while "Jung-ling" sounds like an psychologically fascinating beer, it's pronounced "ying-ling". Yuengling is a toasty lager I enjoy, and they don't distribute into California, so it wasn't a complete waste on the beer hunting front. Oh, you really don't think I was there for something else, do you?

Firm female cleavage is something I've totally been in favor of for since I was twelve. My eyes work pretty well, and I've got plenty of male hormones, so like any red-blooded heterosexual male with the evolutionary drive to implant his DNA into a healthy, fit female, I enjoy looking at women's breasts. Linda, my girlfriend of nearly four years, understands that, and as long as I don't look at other women's breasts for too long, she's OK with that. Or at least that's what she tells me.

But believe it or not, all the slender 20-25 year old Hooter girls, quietly gliding around the place, looking eager for the night to just end so they could leave and change into something less ridiculous, just didn't interest me in the slightest. Maybe being twice the age of the eye candy had something to with this. I've recently suspected that I've officially become an old fart, and perhaps this is God's way of confirming that for me. Then again with Linda in my life, who is demonstably good for me and my kids, when you're lucky enough to be in that situation, things like Hooter's girls become a pointless distraction.
at November 01, 2009