Checking Out The Tap at the Haverhill Brewery 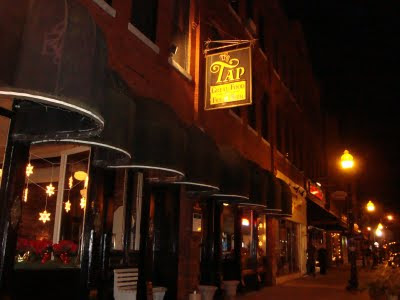 The first thing you need to know about Boston suburb of Haverhill is how to correctly pronounce it. On a recent trip in the Boston area, I was asking around about a place I kept calling "HAVE-er-hill". No wonder all the helpful Bostonians were giving me funny looks. I finally learned that it's actually pronounced something like "HAY-ver-ill". At any rate, once I figured out how to get to the The Tap at the Haverhill Brewery,which lies about 30 miles north of Boston, I navigated through the twists and turns of Interstate 495, before exiting River Street. Heading south of River Street past typically tired suburban strip malls, I finally arrive at a cluster of fortress-like stone buildings which appears to be the heart of the city's downtown business district.

It was a quiet Tuesday evening, and a few of the buildings looked totally closed or under renovation. That said, a few people were out, and a few other restaurants were open. It's hard to pass through a new place in the darkness and draw a whole lot of valid conclusions, but I just getting the sense this part of Haverhill was undergoing a slow urban renewal and the brewpub I was about to enter was a part of this regeneration.

The Tap itself is at the ground floor of one of these buildings, and with it's old wooden floor and bare brick wall interior, blends right in. On the left side of the place is a dining room, where no more than three people were seated that evening, so I head over to the bar on my right. More than a few people turn around to look at me, but once they realize it's nobody they know, they turn back around and go back to their beers. I grab a table, get an order of onion rings, before a dinner of beef short ribs, and start trying out some of their beers. Here's a brief rundown of what I tried.

Scotchtoberfest
The 2.9% abv listed should have been a bit of a yellow flag. That's really low, especially for this style, and as one might predict, this was a very thin beer. But when I concentrated hard, there was a light smokiness there with the slightly caramelized malt, and a pleasant earthiness at the finish. Of course, with little malt opposing it, the carbonation was pretty tingly on the tongue. I enjoyed the underlying flavor, and just wish it didn't seem so watered down here.

Triptych
I just had a sampler tasting of this Belgian Triple, so I didn't take any notes on this one. But I found it rather tasty.

Joshua Norton's Imperial Stout
Rich and complex, with noticeable bitter chocolate flavors and just a little bit of sweetness. Another very smooth drinkable beer and a great beer to end the evening with.
at December 09, 2009