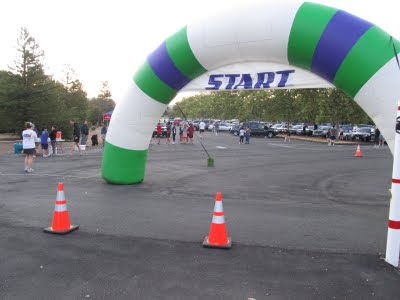 The big question in last weekend's Water to Wine Half Marathon held in Healdsburg, CA is "Was it worth it for Alderbrook Winery?". That's because Alderbrook hosted the post-race festivities which included free wine tasting, presumably to encourage many of the runners to actually purchase some of their wine. Perhaps this is news to Alder Brook, but most half-marathon finishers are fighting dehydration, have at least one body part hurting pretty bad, and often feel like puking. This is not an ideal time to be sipping a Chardonnay and appreciating its various subtle nuances and complexities, so you have to wonder how successful this little marketing idea was.

But hey, I've got to hand it to Alder Brook for putting on a good post-race show, with some tasty rice and beans on hand and a reggae singer so cool, polished and smooth, he could probably turn a Megadeath cover into a feel-good song you could grove to. And since my wife Linda and I wanted to help a race sponsor out and we liked Alderbrook's wines, we picked up three bottles the day before the race with our race packets. (I must admit to having an alter-ego that likes a good glass of wine from time to time.)

As for the race, it started at the base of Lake Sonoma dam and wound through picturesque country roads over gently rolling hills past several vineyards and wineries before finishing at Alderbrook just outside of Healdsburg, with a net elevation drop of 100 feet. After recovering from a bout with bursitis in April that knocked me out of the Santa Cruz Half Marathon, then going through a personally stressful period in June and July that affected my training. Having completed a number of runs of 7-12 miles around 7:00-7:10 minute per mile pace that were pretty challenging, I was just hoping to break 1:30, about 6:52 per mile pace. 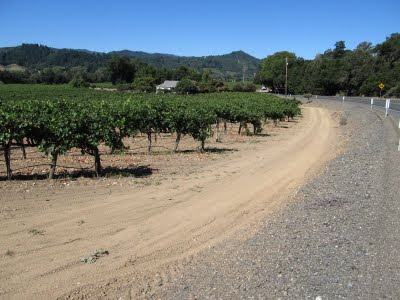 The correct pace for a half-marathon based on fitness level is a deceptively comfortable one, and my biggest fear going into the race was going out at "only 6:40" pace, and then staggering in the last few miles. So the day before, I drove over my local high school track, and ran a 6:48 to get a get a good feel for target pace. At one point, I ever close my eyes while running, just to focus on rhythm and cadence. Then, I also did a few 40 yard stride-outs in my bare feet, which as I found out in a recent tempo work-out helped focus to form and kept my feet feeling fresh.

And wouldn't you know on race day, every time I looked down at my watch at each mile marker, I had just knocked out the last mile in 6:45-6:50 pace. By mile four, it was a little unreal, and I wondered if the mile markers were somehow wrong. No big hills certainly helped for uniform pacing, and I slowly marched through the field through miles 2 through 7, but after passing a guy struggling up a small incline, I could see no one ahead of me. I blitzed through downhill ninth mile in 6:36, but otherwise kept ticking off each mile in 6:45-6:50 even with no one in sight to run with. But since the course always went one way or another, or gradually up or down, the course itself gave me something to focus on.

I finally saw a couple runners way ahead of me at mile 11, and was reeling them in, but not fast enough before the race ended. I crossed the finish line in 1:28:41, which is 6:46 pace. One of the best paced races in my life and also one of the best times relative to my fitness. It's not a coincidence.

But the really big news was that Linda set her PR in 2:16:49, just under 10:30 mile pace, a pace not too long ago she couldn't maintain for a 10k. Was her PR due to good pacing as well? We'll never know for sure, since she can't exactly recall her mile split times, but she remembers her early miles just under 10:30 which is right where she should be. She undeniably earned her PR for all the hard work she put in weeks before the race, and she should be proud of what she accomplished, even if she keeps saying she runs like a turtle.

And with all due respect to all the excellent wineries in the area, the only proper way to celebrate Linda's half-marathon PR was with a few good beers. So we headed on over to Healdsburg's Bear Republic Brewing. 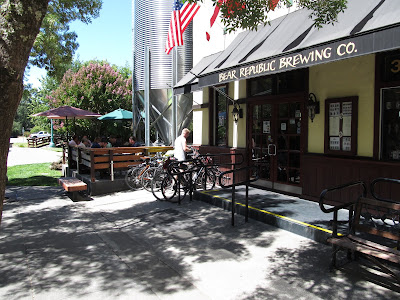 Bear Republic is best known for their Racer 5 IPA, the classic West Coast IPA where the hops dominate with the malt mostly an after thought. But go to the brewpub, and you'll get a much different appreciation for Bear Republic, where believe or not, the malt often takes center stage.

This was certainly evident in the first beer I tried, the Peter Brown Tribute Ale, named after a former sales manager for the brewery who passed away nine years ago. It was impressively clean and smooth, brewed with molasses and brown sugar that blended seemlessly with the light coffee flavors and nuttiness of the malt. And who says Bear Republic cannot make a balanced IPA, as Linda enjoyed their Endeavor IPA, with "only" 65 IBU's which had a lovely soft, biscuit-like, and lightly fruity hop character, which Linda and I prefer over Racer 5.

Speaking of Racer 5, they serve a Black IPA version of it here, called Black Racer, where the coffee-like like bitterness of the malt melds with the bitter hops creating a very bitter, yet mellow and easy drinking experience. Finally, Linda and I split a Racer 10, a Imperial IPA version of Racer 5 for "dessert". I'm beginning to appreciate why so many West Coast style IPA's taste even better in Imperial form, as the extra malt and associated sweetness just seemed to give the hops an extra juiciness and fullness.

So remember for your next race, conservatively figure out the right pace you should run, keep the mental discipline in the early miles to keep that pace, and fight like hell at the end. The beer will taste even better.