Despite what you often hear, canned beer is not better for the environment than bottled 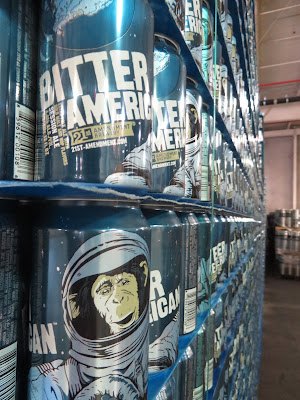 Whenever a brewery trumpets the release of some beer packaged in cans, they almost always say something like "...and best of all, cans are better for the environment than bottles". For years, plenty of craft breweries claimed cans are better than bottles for the environment since they are lighter, requiring less energy to transport. The fact that cans are more recyclable than bottles is also cited as a reason why cans are more environmentally friendly. On the other hand, Tony Magee of Lagunitas has declared his brewery will be the last in the United States to sell beer in cans, citing environmental concerns of bauxite ore mining.  So who's right?  Seeking answers to what was becoming a complicated question, I turned to Cheri Chastain, Sierra Nevada's Sustainability Manager and asked her point blank: "Which is better for the environment, cans or bottles?"

"I don't have an answer for that," she responded, laughing. Turns out, it depends how far back you look into the resources required from the time the package is created for until the time you open them to enjoy a cold one. "Bauxite ore mining is incredibly destructive on the environment. That said, aluminum is easier to recycle since it doesn’t break like bottles and weighs less, so it takes less energy for shipping, resulting in less fuel consumption and fewer greenhouse gas emissions. It's a really difficult question to answer."

Various studies attempting the answer this question come to similar conclusions. Cans require about twice as much energy to manufacture than bottles. So beer must be shipped long distances, estimated to be at least a few hundred miles, before the energy savings due to aluminum's lighter weight offset the increased energy of production. New Belgium Brewing Company, which like Sierra Nevada devotes considerable resources to environmentally sustainable brewery practices, has an interesting report on the matter on their website also declares no winner in the cans vs. bottles debate.

So what's an environmentally conscientious beer drinker to do? "Draft is the most sustainable option for beer," answers Chastain. Kegs are reusable and when used with a reusable glass or cup, the most environmentally sustainable option for beer.  "I also encourage people to make sure to recycle whatever package they chose, whether bottles or cans," adds Chastain. Another reason to support your local brewery is that the shorter the beer is transported, the less impact on the environment.

Thursday we'll consider the question about the possibility of a nation-wide program of reusable bottles.