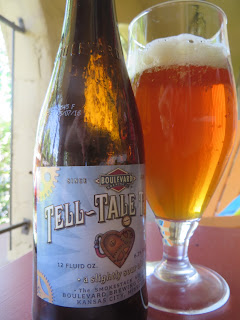 It's the time again to ramble on about some new beers encountered on my travels, this time with a bit of fruit theme,

Let's start with Tell Tale Tart, from Boulevard Brewing. What a wonderfully balanced composition of simplicity this is. There's a little musty funk, a little sweetness, some fruity esters and some sourness that create an excellent warm afternoon sipping beer. I applaud Boulevard for resisting the temptation to dump boysenberries, tamarind or some other fruit or spice addition that just doesn't belong there. It's nearly perfect as it is.

And then there is Anderson Valley's Briney Melon Gose. As you might expect, there's noticeable melon flavors, barely detectable saltiness and almost no sour tang. Well, it's balanced. When the Gose style came on the scene a couple years ago as, a wonderful breath of fresh salty-sour air. Anderson Valley's Gose, and I mean just Gose without any fruit added, was one of the best. But it seems like the Gose has now become just a general purpose fruit beer. I was a bit on the fence about Anderson Valley's Blood Orange Gose and really under whelmed by Sierra Nevada's Otra Vez Gose.  Briney Melon Gose works as fruit beer and I enjoyed drinking it.  But I'm missing that yin-yang salty/sour balance that made the Gose style so enticing. Now, breweries are just dumping fruit and spices into their Gose and upsetting that balance. German brewers buried in Leipzig have every right to be spinning in their graves. 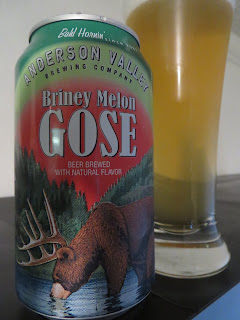 Finally, we come to Berry the Hatchet from Coronado Brewing, which sent me a sample of this beer to try. They take a light touch with the fruit and wisely brew this with little sweetness, lest this become syrupy tasting. There's a nice complexity to the berry flavors if you concentrate hard on them, and they end with a satisfying tartness. I suspect beer geeks will be a little underwhelmed, but the other 99% of the population will be just fine with this summer thirst quencher which at 4.6% abv, is rather sessionable. 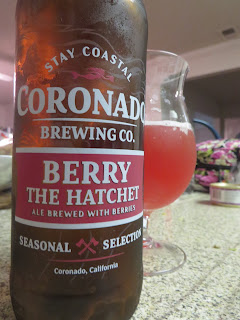