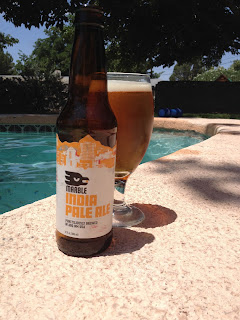 You may have noticed a great lull in posting in the early part of July. Of the many reasons for that, one was a family trip to Las Cruces, New Mexico last week to visit my parents in-law. During which, a quick trip to the grocery store turned up so New Mexico (New Mexican?) beer finds so let me ramble about them.

First up, Marble Brewery IPA. I've had this beer before on prior travels to New Mexico, and me thinks they've tinkered with the recipe. It's much brighter and floral than I recall, with some earthy and pineapple notes thrown into the mix. It seems rather malt forward with a creamy underlying malt base despite the 95 IBU's. Despite its slightly heavy malt character, the hop freshness wins the day to create a brew that did a good job quenching my thirst under the hot New Mexico sun. 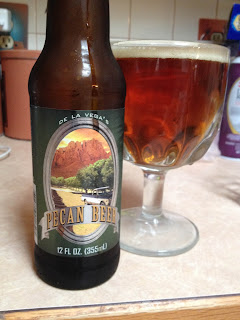 Then there's the intriguing De La Vega's Pecan Beer. They grow a lot of pecans in New Mexico, so it figures someone would try putting some in a beer. De La Vega basically takes their Amber and adds pecan oils to it. And by golly, it works. It's not the most subtle beer, the pecan nuttiness is pretty front and center but the pecan blends well with the toasty malt.  The flavors are clean, the beer is uncluttered, and it all works. 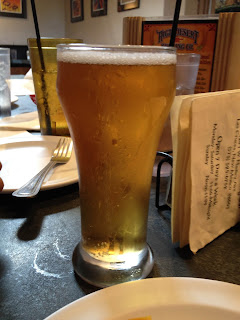 Finally, every trip to Las Cruces includes a stop High Desert Brewing. It's interesting to see how the place how evolved over the past nine years since I've been coming here. When I first dropped by, it was a quirky locals joint, featuring one of the finest collections of Velvet Elvis paintings west of the Mississippi back by the restrooms. Then a few years later, the Velvet Elvis's disappeared and the place seemed dominated by a hipster college crowd from nearby New Mexico State University. Just last week, the gentrification of High Desert seemed nearly complete, with trendy art adorning the walls, but the Velvet Elvis painting were back!  As for the beer, it was solid as ever. Over onion rings I enjoyed their clear Hefeweizen, with a snappy wheat tang and light clove aromatics. Now a German Brewmaster might rightfully claim this isn't exactly the traditional, cloudy yeasty Hefeweizen we've grown to know and love. I'd have to agree, but the brew still tasted mighty fine.