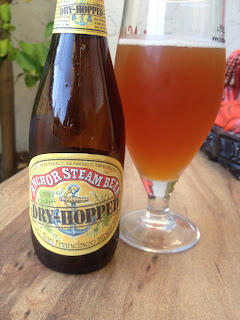 Once again it's time to ramble about three notable beers I've tried over the past couple weeks.

We'll start out with Anchor's great twist on their iconic flagship. I'm talking about Anchor Dry Hopped Steam Beer. There's a little more to Dry Hopped Steam than just the dry hopping as Anchor Brewmaster Scott Ungermann also lightened the traditional Anchor Steam recipe for the dry hopped version. “We took our most popular, classic beer and gave it a contemporary twist by introducing a lighter body and an elevated, dynamic hop profile using new and classic hop varieties," states Ungermann in a press release. The dry hopped version is lighter and brighter than traditional Anchor Steam, with the floral hop aromas you'd expect from a dry hopped brew. It's still got the classic complex roasty and slightly woody character, it's just dialed down a bit to let the floral hops through. What's interesting is drinking the dry hopped version and the traditional one side by side to contrast the deeper, richer flavors of Achor's traditional Steam with the new, more contemporary version These days, a lot of the older craft breweries like Anchor struggle a bit to remain relevant in the fast moving brewing industry. Dry Hopped Steam shows Anchor has effortlessly overcome this challenge. 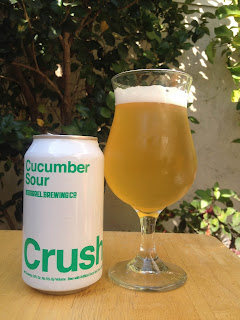 Next beer up is Cucumber Crush Sour from 10 Barrel Brewing. 10 Barrel takes a lot of flack from selling to corporate beer giant AB InBev , which reminds me of the time I was at an small coffee shop across the street from a Starbucks. On the coffee shop wall, there were all sorts of signs saying things like "Corporate coffee was evil", "Starbuck Sucks", and various other derision thrown at the Starbucks across the street. There was just one small problem: Their coffee was noticeably inferior to Starbucks. Say what you want about the evil diabolical plans of AB InBev, and while I likely agree with you, 10 Barrel is demonstrably one of America's better breweries, still going strong since the acquisition. Cucumber Crush is yet another example. There's light flavors of cucumber with a fruity, strawberry-like clean tartness. That's it.  Yet, this simple, straightforward uncluttered combination is just ridiculously refreshing.

Finally, we come to JC Flyer IPA from Iron Springs Brewing in Marin County's Fairfax. With family in Marin County, I drop by the Iron Springs Brewpub every so often and have enjoyed this West Coast style IPA. It's citrusy, with tangerine flavors dominating, with some piney notes and a little resiny stickiness. The malt basically stays out of the way. Just another in the long line of solid-to-great IPA's you find all over the place in California. 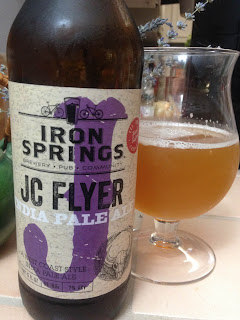