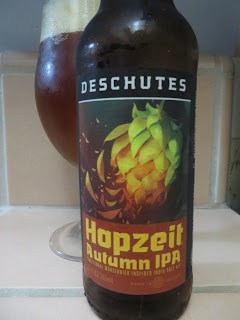 Time again to ramble on about a three brews I've tried lately.

We'll start with Hopzeit from Deschutes, which they describe as an Autumn IPA as it's basically a cross between a Marzen and an IPA.  I first tried this at the original Deschutes brewpub in Bend, OR and was a bit underwhelmed. It came across more as an interesting and not entirely successful brewing experiment. The hops seemed a little harsh, overwhelming the restrained, underlying Marzen, with the flavors clashing more than harmonizing. But I decided to give this one a second chance when I saw a six-pack of it at my local grocery store and that turned out to be a wise decision. Maybe the extra time in the bottle allowed the hops to mellow down to the right level, as the light sweet caramel maltyness and the citrussy orange hops with a touch of resin were far better balanced and harmonizing than the brewpub version. Kudos to Deschutes for crafting an IPA which truly tastes like fall, at least when it's in the bottle. 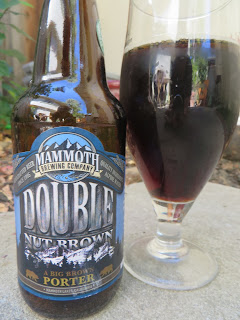 Next up, Mammoth Brewing Company Double Nut Brown Porter. The annual family trip to Yosemite National Park is a time when we can all appreciate the surreal beauty John Muir popularized over a century ago and it's also the time to snag my annual fix of Mammoth brews. Porter is one of my favorite styles that's becoming an endangered species in the beer world. This one quickly jumped towards the top of my porter list with its complex coffee flavors which yield to more pecan nuttiness as the brew warms.  It's very roasty, almost but not quite to the point of near ashyness, with virtually no sweetness to let all its great complexity shine through. 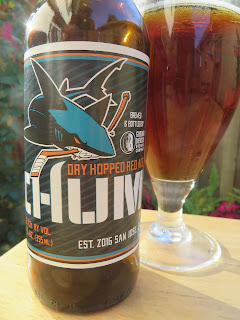 Finally, we get a beer with one of the most unappetizing names ever.  I'm talking about CHUM Dry Hopped Red Ale from Gordon Biersch, a tribute of sorts to the San Jose Sharks with which Gordon-Biersch has maintained a long partnership. Thankfully, it tastes a lot better than its name. There's plenty of the toffee thing going on, with juicy, fruity esters suggesting apricot, and a soft earthy finish. It's really well done, one of those beers that's either very drinkable if that's all you want, or one to ponder deeply into all of it's flavor complexity if that's what you in the mood for. A lot more than you'd normally expect from a sports tie-in beer.

But be careful, chum has led people into perilous situations.