Brewing up a batch of Verona's Coffee Porter 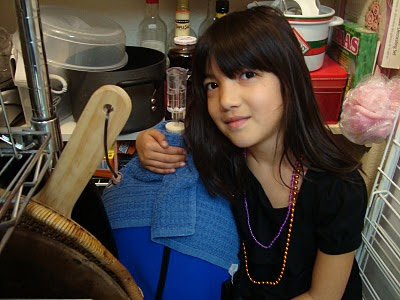 My daughter Verona was not named after the classic Italian city of Romeo and Juliet fame, but a small road in San Jose. Her mom and I were struggling to come up with a name after my mother-in-law at the time shot down the first two we decided on. Driving around aimlessly one weekend in San Jose, CA, we found ourselves on Verona Drive and figured that would be a pretty and unique name for our daughter to be. It's one of the few things my ex-wife and I agreed on.

My seven year old daughter is smart, pretty, makes new friends in seconds flat, and handled the turmoil and challenges of experiencing a divorce and having a autistic brother with the understanding and maturity decades beyond her years. I'm very proud of her.

So whenever buying coffee, I pick up a pack of Starbuck's Verona Coffee blend. And deciding to get a little experimental with my fourth home brew, a coffee porter seemed a good direction to go. It only seemed natural to name the brew Verona's Coffee Porter and use Starbuck's Verona Coffee to add an extra dimension to the roasted malt character of a porter, one of my favorite beer styles.

For the recipe, I took the London Porter recipe from page 151 of The Brewmasters Bible by Stephen Snyder, and used a technique outlined in Randy Mosher's wonderful book Radical Brewing to add cold filtered coffee to the brew. Both books have become great additions to my culinary library. 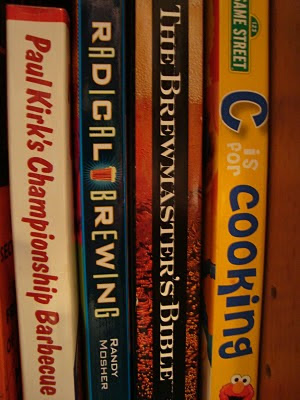 Ferment in the primary for two weeks at approximately 68 degree Fahrenheit.

Transfer to a secondary fermenter, and add 1/2 liter of cold filtered coffee, produced by grinding 4 ounces of Starbuck's Verona blend, adding 1/2 liter of water, and letting sit covered in the refrigerator for 24 hours. Bottle after one week.

For those keeping score at home, the original and final gravities correspond to a 3.4% abv brew, rather low for a porter. In my first three home brews, it was clear from my original gravity readings I wasn't extracting enough malt from the grain, and solved this problem by simply using larger steeping bags for the grains, allowing more water flow through the mash. That problem solved, I encountered another one. Not enough yeast. Hardly any fermentation occurred in the secondary fermentation judging by the activity of the carboy airlock, and the final brew's carbonation was rather flat. The original gravity was a tad low, as the recipe gave an estimated original gravity of 1.046-1.048. But the fact that the final gravity of this recipe is expected to be 1.012-1.014 and this brew ended up at 1.018 strongly suggests incomplete fermentation.

Of course, the classic English porter is a little flat, but have to concede the extreme the flatness of this brew is a stylistic defect. The single vial of Dry English Ale yeast I used seemed a little clumpy, so maybe it was old or didn't get incorporated into the wort very well. Whatever the reason, I'm going to use at least one extra vial for my next brew.

As for the flavor, the coffee blended really well with the roasted malts, not overpowering them, and everything seems in the right balance. It also seems I've eliminated the harsh grainy undertones noticeable in my previous brewing. I'd rather brew great beers than learning experiences, but then home brewing is a lot like running a race. There's a lot of satisfaction from taking on the challenge, and you learn from the successes and failures in both the preparation and the final result, and build from it. So I'm eager to give it another go with my next home brew.
at March 10, 2010