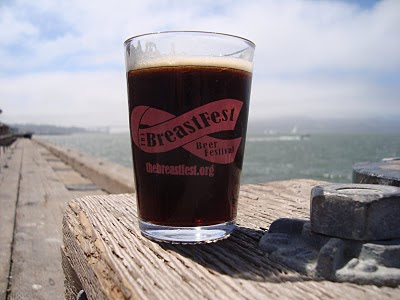 For over thirty years, I've been in favor of women's breasts. And so when Linda, my wife to be, spent the weekend camping with her girlfriends on a big sisterhood extravaganza, I headed over to Ft. Mason in San Francisco to The Breast Fest. It's a beer festival raising money for The Charlotte Maxwell Clinic to provide breast cancer services for low income women. In its 10th year, over 40 Northern California brewers poured from both their standard offerings with a few specials mixed in. 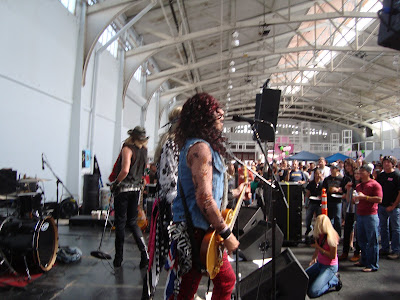 But if you ask me, the surprise hit of the afternoon was Metal Shop, a cover band having way too much fun wearing wigs, spandex, and leather pants while playing 80's hair metal covers. Any band that can make the insipid, minor throwaway hit "Lick It Up" by Kiss actually sound good must be doing something right. There's just a simple exhilaration in pumping your fist to absurdly lightweight lyrics like "We're not going to take it / No, we ain't going to take it!" or "Here I am / rock you like a hurricane". Can someone tell me why I was listening to those whiny, weepy, and downright depressing bands like The Cure, Echo and the Bunnyman, and The Smiths back then?

But let's not get distracted from the important issue at hand, women's breasts. On a few occasions, Linda and I have had conversations about large breasts displayed by women we've noticed. Now guys, I hope I don't need to tell you that if you going to talk about large breasted women with your better half, make sure she's the one who brings it up. Of course, Linda starts talking about women with large breasts because she enjoys watching me tip-toeing around the land mines of that particular topic. After discreetly analyzing the plastic surgery performed on a few women, I would have to say on a strictly primal urge basis, bigger is not better. In fact, out of proportion, over stuffed and simply irregular looking breasts inspire the exact opposite of the male mating instinct, no matter how big they are. As for Linda, I love her for her mind and respect her whole body. But I've got to say I'm more into her breasts than say, her ankles.

And so in the spirit of bigger is not better, let me praise a few beers I sampled at The Breast Fest which were not the big beers typically served at festivals as breweries try to out do each other. Instead, let me review four beers I enjoyed that instead of going big, were supple, perky and a little bouncy.

"Bliss" by Ale Industries
Checking in at a mere 3.5% abv, I won't forget this nifty little session beer from Ale Industries anytime soon. It's got this great nutty flavor with a slight little caramel note to go with it. Since I prefer malt forward beers, had to love a session beer that gets its flavor from primarily from the malt, instead of hops or yeast you find in most session brews.

"Brendan's and Jessica's Bridal Ale" by Moylan's Brewery
Brewery owner Brendan Moylan is getting married this year, and produced this to celebrate. It's a golden ale with a little extra hop kick that's creates a really fresh, crisp, and refreshing beer. That's it. Not twelve different flavor notes, just something simple, crisp, and refreshing. Trust me, you don't want complications in your marriage.

"Uncle Svenson" by Moonlight Brewing
The Moonlight Brewing server explained the beer was made without any hops, with pine needles instead. As I continued to ask pesky questions about this beer served from a tap marked "Special", the friendly Moonlight server grew less and less friendly. After doing a little post-festival research, I believe I was having Moonlight's "Uncle Svenson". This Scottish Gruit had smooth, dark, and smokey malt character much like a light Scottish Ale, with the pine needles giving a little piney and juniper character, with a slight menthol finish. It's not for everyone, but I found this change of pace beer intriguing and enjoyable.

"Black Prince Porter" by English Ales
Porters are one of my favorite styles, and this one just seemed to hit all the right porter notes. Plenty of black patent malt in this one, giving it a slightly astringent character with a nice roasted coffee flavor to it. A porter done well in the classic English tradition is one of life's simple pleasures.
at July 18, 2010