Goooooooooooool! Spain's Alhambra Especial Premium Lager is the Beer of the Month 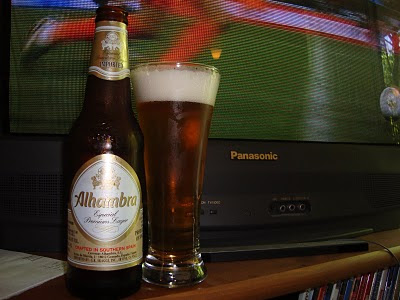 I played soccer as a kid. My strategy was basically to run around all over the field after the ball, and if I got to it, I would kick it in the general direction of the opponent's goal. If someone from the other team attempted to dribble by, I'd take a mighty swing with my leg, and kick either the ball or the other guy's leg pretty hard. This simple technique made me a pretty effective defenseman.

When it was time to decide what sport to go out for as a high school freshman, it came down to either soccer or cross-country. Knowing the high school soccer coach preferred players with "advanced" skills such as dribbling, passing, and shooting, the prospect of riding soccer team bench didn't appeal to me much, so I went out for the cross-country team instead, since good coordination is not particularly required for running. It proved to be a wise decision

But I still follow soccer, and love the celebration of the beautiful game which is the World Cup, a March Madness for the whole world if you will, held every four years in June. And if you hadn't heard, Spain won the championship in a hard fought match 1-0. It wasn't the most pretty soccer mind you, but thankfully Spain scored the winning goal with just a few minutes left in extra time, preventing the greatest trophy in soccer to be won in the worst way imaginable, on penalty kicks.

So to celebrates Spain's victory, the Beer of the Month for July is Alhambra Especial Premium Lager from Spain. For a lager, it's rather malty and has this slight caramel twang to it, with slightly tingly carbonation, and a very light earthy and slight grassy hop finish. I can't help wondering if the light hop touch is by design, or due to the long trip from Spain to the San Francisco Bay area. A little extra hop bite wouldn't hurt it. Either way, it's a fresh and substantial lager to enjoy while toasting the Soccer Champions of the World.
at July 11, 2010

Email ThisBlogThis!Share to TwitterShare to FacebookShare to Pinterest
Labels: Alhambra, Beer of the Month, beer reviews