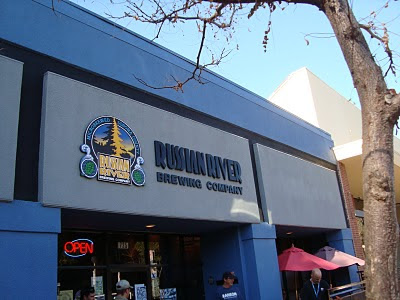 A word of advice. If you go to Russian River Brewing in Santa Rosa, CA, don't order the Pliny Bites. It's this typical pub appetizer they serve, sliced toasty bread with melted cheese and jalapenos on it. Lots of jalapenos. Linda and I picked off about a 2-3 hand fulls of sliced jalapenos from our basket of Pliny Bites after realizing we weren't going to taste anything else for the afternoon besides jalapenos unless we pulled them all off. We don't shy away from spicy foods, but there's a difference between adding a spicy kick to a dish and having absolutely no restraint what so ever with the jalapenos, and this definitely fell in the latter category. While no culinary expert, I have to question the wisdom of an appetizer that effectively kills the taste buds for the rest of the day.

Fortunately, the Perdition Ale I ordered was brought out before the Pliny Bites. My dictionary defines the word "Perdition" as "a total loss". Well, it wasn't that bad. There just wasn't too much to the beer, which Russian River describes as a Biere de Sonoma, but might be more directly described as a brown ale made with Belgian yeast. It had a little malty, nutty character, a slight aromatic spice note, and a slightly astringent finish, but as a whole, I found it not particularly special. The good news is that things got a lot better from here.

Next up was the Russian River Porter, checking in a 5.7% abv and 41 BU, hefty numbers for the porter style. I doused my tongue with as much water as possible in hopes of tasting something. There's plenty of rich coffee and chocolate malt flavors, and a surprising citrus-like finish to it. At least that's what I think I tasted trying to push it's way past the overwhelming jalapeno burn in my mouth. I also gave the OVL Stout a try. It's a great bitter roasted malt coffee bomb, very dry and astringent, and at only 4.0% abv. Always great to find find another flavorful session beer, but then actually handling 2-3 pints of all that roasted bitterness in an evening would be a challenge for most. Russian River made their claim to fame on Belgian beers, special barrel aged releases, and of course, the cult status of hop monsters like their Blind Pig IPA and Pliny the Elder Imperial IPA, but they do traditional English malt forward styles quite well. Linda, ever the hop head decided for the Russian River IPA and Pliny the Elder. Finally, after lots of water and a tasty vegetarian pizza, we could finally taste something other than jalapenos.

So Linda and I decided to share a 10 ounce glass of Temptation. Now we're talking. This Belgian Ale, aged in chardonnay barrels had lots of great, intense flavors, yet remained smooth. It starts our with an intense sourness, oak, tropical fruit flavors and a slightly buttery chardonnay in the mix. Just a great beer drinking experience that we savored slowly, and the week after we shared it, it won a sliver medal at this year's Great American Beer Festival.

I probably don't need to tell you they have some great beers at Russian River, but eat the Pliny Bites at your own risk. 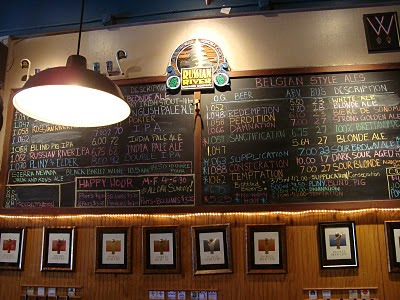