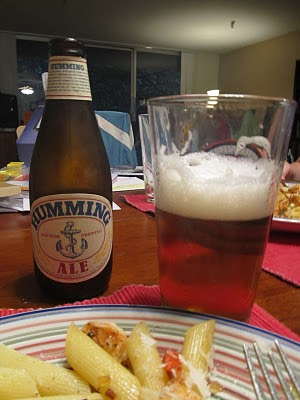 For the month of October, I bestow the honor of Beer of the Month of October to Anchor Brewing's Humming Ale, their recently released fall seasonal brew. While Anchor Brewing has long been a craft brewing pioneer since Fritz Maytag rescued the brewery in the 60's, they seemed a bit behind the craft beer curve, with a tried and true beer line-up, but nothing particularly new or original. That's changed in 2010, with an excellent collaborative Imperial Stout with Sierra Nevada, and now Humming Ale, the first seasonal Anchor's released since 2005.

And what a great, easy-drinking yet sophisticated brew this is. It's rather fruity, with apricot and a little pineapple flavors, and then has this herbal, almost savory, slightly astringent hop finish. I found it well balanced, with a great composition of flavors that just seems to hit all the right notes.

Everyone seems to be holding their breath, wondering how the new ownership of Anchor will handle the national craft brewing treasure Fritz Maytag sold them. Seems like everything is working out all right so far.
at October 06, 2010