Beer of the Month: Tilted Smile by Uinta Brewing 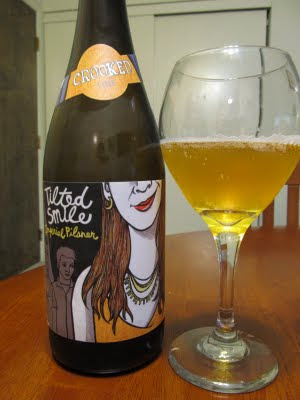 Haven't we had enough Imperial somethings? The thought certainly crossed my mind as I stood there in a liquor store, looking at a bottle of Uinta Brewing Tilted Smile standing there in the upright cooler, which advertises itself as an Imperial Pilsner. I'm trying to figure out what an Imperial Pilsner would taste like. Budweiser on steroids? That doesn't sound so good.

But I was intrigued enough to try it. Uinta was a brewery I was familiar from a few trips to its home state of Utah, and their Belgian Ale was a slick, nifty brew. I tried garlic ice cream once, never to do it again, but thankful I can tell the tale of the day I tasted it. Maybe trying an Imperial Pilsner would be the same experience.

To my pleasant surprise it was actually a great, unique change of pace beer. It's got a slight heftiness from the malt, with light peach or grape flavors, that's well balanced by savory, sage-like herbal hops. It tastes like white wine that's been dry-hopped, even though that veers into garlic ice cream territory.

Tilted Smile, which checks in a 9% abv, is part of Uinta's Crooked Line series of stronger, experimental beers. It's a bit of a business risk for Uinta, as this Utah brewery can only sell these beers in its home state through the highly regulated Utah State Liquor Stores.

I like breweries that take risks. Just as long as they don't make a Garlic Imperial Pilsner.
at May 13, 2011