The Session 51.5: It's An Aged Wisconsin Cheddar Battle Royale

Now it gets intense. After giving it their best shot, some great beers have fallen by the wayside. Only the surviving champions remain to fight this epic battle. A lifetime of drinking beer and eating cheese has prepared me for this very moment, so stand back because I'm about to announce the Ramblings of a Beer Runner Session Beer and Cheese Pairing Intergalactic Champions!

Well, sort of. I cannot possibly buy all the beers selected in the Session's first rounds. Even if I could find and purchase all the beer listed for all three cheeses, my wife Linda and I didn't think it was a wise career move to call in sick two weeks straight working our way through all the cheese pairings, and then gleefully posting the results on the Internet for everyone, including our bosses, to see. We tried to pair up with some of our friends to help us out with the final decision, but unfortunately our schedules didn't match so well, and those plans fell through. So Linda and I soldiered on, focusing on the aged cheddar cheese pairings, since we thought these were the most intriguing variety of beers selected by Session participants. So with our leftover slab of 3-Year Aged Wisconsin Cheddar cheese, and yes, I know this isn't the "official" Aged Wisconsin Cheddar Cheese for The Session, we picked three beers selected by other bloggers to rumble with the beer we picked in The Session's first round. After an evening drinking beer and eating cheese, we picked our winner . So without further ado, here is the line-up for The Aged Wisconsin Cheddar Cheese Battle Royale. 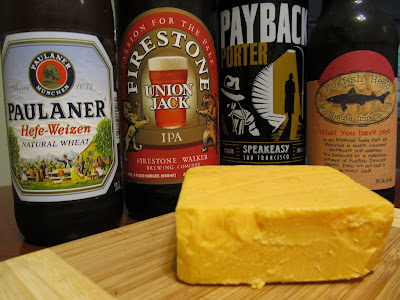 Speakeasy Brewing's Payback Porter
The tall, dark, mysterious stranger hiding in the shadows was Jay Brooks's pick. Would his shady underworld connections strike fear in the hearts of his opponents, giving him the edge?

Firestone Walker Union Jack IPA
This precocious IPA from the rustic bucolic wine town of Paso Robles, CA was the choice of Sean at Beer Search Party. Union Jack might play well in the sticks, but how would this country boy do when it got to the big city?

Paulaner Hefeweizen
The Thirsty Pilgram declared this beer a cheese slut. Could she overcome her much stronger flavored competitors through crafty seduction and allure to take victory back to the beer fatherland of Munich?

Dogfish Head 90 Minute IPA
Our champion we picked in the first round, fresh off its victory over a furious Bear Republic Racer 5. This big bad strong brew from the East Coast was primed and ready for fresh blood to take the title!

Let's get ready to rumble!

The first thing Linda and I noticed is that Paulaner Hefeweizen goes with cheese the way a wheat cracker goes with cheese. Sure it works, but it just isn't all that exciting. Its banana fruit esters likely blend well with many cheeses, but they weren't working all that well with the cheddar. Linda and I appreciated the pairing, but found it a bit underwhelming. As this point, I am tempted to try and write a clever and witty sentence combining the words "my wife and I" and "cheese slut" but common sense tells me this isn't a good idea. So instead I'll just declare Paulaner Hefeweizen will have to shack up somewhere else!

Next up was Speakeasy's Payback Porter. Porter is one of my favorite styles, and Payback Porter is one of my favorite porters, so I was quite curious how it would pair with cheddar. One sip of all those intense, roasty coffee flavors reminded me why I like this beer so much. Problem was, all those great strong flavors overwhelmed the cheese, and clashed with its tanginess. As much as we appreciated the great beer, the pairing just didn't work for us. Payback Porter gets whacked!

So it came down to Dogfish Head 90 Minute IPA and Firestone Walker's Union Jack. Two muscular IPA's going mano a mano in a hop fueled death match! We liked both pairings and it was really close, with both of going back and forth about which one we preferred. In the end, it was the sweet malty goodness of the Dogfish Head 90 Minute IPA that was its undoing. The pairing seemed a little heavy, the cheese feeling a little flabby in the mouth. On the other hand, the bright, intensely floral hops of the Union Jack coupled with its light malt character really blended well certain elements of the cheese, but each maintained its own unique character. Each seemed to do its own riff on a common flavor theme like an experienced jazz duo. Union Jack takes the title!

We learned a lot from this little exercise. The little nuances and characters of each beer is really enhanced when paired with cheese, and we often chose a beer over one we normally like better, the lesser beer creating a better flavor experience when mingling with the cheese in our mouths. For all the IPA's we tried, the flavor profile of the hops made a huge difference on how the beer paired, and sometimes, the flavors clashed badly. I wouldn't be surprised to find a slightly different tasting cheese resulting in a completely different set of pairing results.

But most important, we learned that when it comes to beer and cheese pairings in the relaxed and open spirited beer community, where culinary elitism is rare, just have fun with it.
at May 19, 2011