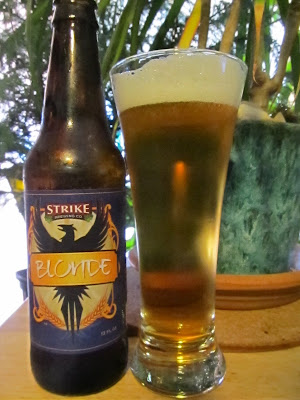 There are some breweries that need no introduction.  The South Bay's Strike Brewing isn't one of those breweries, but they need a lot less of an introduction than they did less than two years ago when they first started out.  I used to hunt down Strike in better bottle shops or high end boutique grocery stores.  Now, I can walk a block to my neighborhood Safeway in Campbell and pick up their beer.  And they've emerged from the Bay Area to start distribution in Southern California.  For those wanting the details on this brewery formed by three collegiate athletes, check out this interview back when they were first starting out.

With all the summer heat, my desire for massively hopped IPA's or heavy imperial stouts has plummeted.   I've been drinking more of the lighter beers of summer and recently rediscovered Strike Blonde, one I've enjoyed for what seems like a very long time.   The beer has a crisp malt with this great grassy, slightly earthy vibe.  That's it.  It's simplicity works to it's advantage.  Simple yet flavorful beers are underrated, and harder to brew than the big stouts or IPA's that get all the beer geek buzz, since the brewing flaws have nowhere to hide.

There's a reason it's easier to find Strike these days.