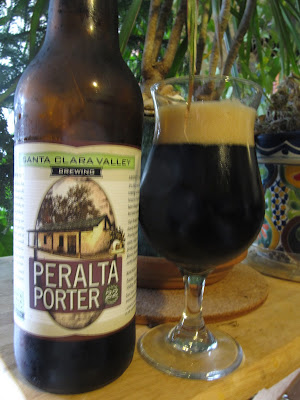 Two New Beers Arrive in the Bay Area,
South Bay newcomer Santa Clara Valley Brewing does it again with their strong second release, Peralta Porter.  It's a dry porter with plenty of roasty, dark chocolate flavors you look for in this style.  A slight, but certainly noticeable earthy hop finish gives it a nice twist.  Yet another reason you don't have to leave the South Bay to find good beer.  You can find Peralta Porter in many fine bottle shops, including where I bought mine, Cask and Flask Liquors.

The folks at Hanger 24 sent a bottle of their Polycot Wheat Ale my way, and I'm glad they did.  It's part of their Local Field Series where the Redland, CA brewery integrates locally sourced ingredients into their beers.  Polycot uses organic apricots from Southern California's high desert, which blend quite well with the wheat tang and overall dryness of the brew to create something pretty refreshing for the late summer.

Beyond the Pale
Eagerly awaited is Beyond the Pale: The Story of Sierra Nevada Brewing Co. by brewing pioneer and Sierra Nevada founder and CEO Ken Grossman scheduled for release this August 26th.  It's a well known story but I, like plenty of others, cannot wait to hear Grossman tell it.    And yes, you'll be seeing a review of Beyond the Pale here later this year.

Spread Opens in Campbell
I'm pleased to announce the opening of Spread, a wine/beer garden, bottle ship and sandwich place on the west side of downtown Campbell.  It's the sister outfit of Campbell's Liquid Bread gastropub, and just like that, Campbell's become solid beer destination.  I've tried the sandwiches and they are delish.  It's only a 15 minute walk from my home, so you'll find me there often.