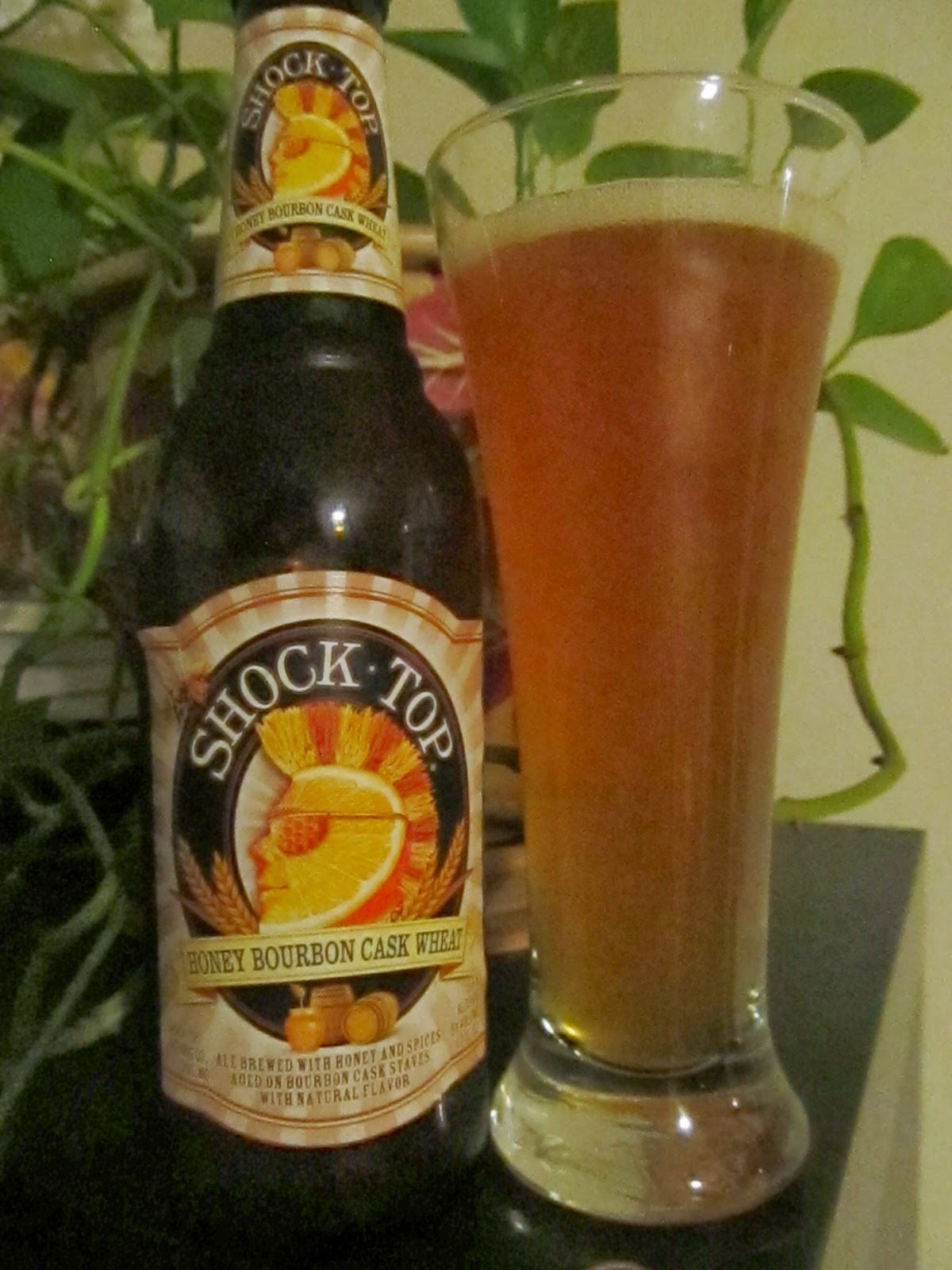 What would you think if you heard about a brewery releasing a new wheat beer brewed with honey, spices and aged with bourbon barrel staves?  Yet another craft brewer pushing the envelope, you might think.  Now what if I told you this was a new beer released by Shock Top, a product of mega-brewer A-B InBev.  You might dismiss it as a craft beer poser or a gimmick from a desperate corporation eager to win back lost market share.  Or you might instead conclude the A-B InBev has seen the errors of the bland, macro-lager ways and is trying to something novel and distinctive.

Before you dismiss Shock Top too quickly, don't forget nearly a year ago,  Shock Top wowed a bunch of BJCP judges with their experimental Campfire Wheat. The stunned judges found it tasted just like s'mores in beer form.  So I was intrigued after recently an e-mail from Shock Top asking me if I was interested in giving Honey Bourbon Cask Wheat a try, which I accepted.

So how does it taste?  Well, it was interesting, and I genuinely mean that in a good way.  I found it a little heavy, sweet and little floral from the honey with light woody bourbon flavors.  I didn't dislike it, but can't say I really liked it either. It takes a very deft hand to balance strong flavors like bourbon in a wheat beer and the beer seems to sag a bit under the weight of its honey and bourbon additions.   I must admit Shock Top carries a lot of baggage as an A-B InBev product which makes it hard for me to really judge objectively, but I give them a lot of credit for trying something new. All things considered, I'd have another one.

Shock Top seems to be making an attempt to emphasize the brewing process and ingredients and create something new and unique, which is a lot about what craft beer is all about.  At least that what it seems like when you watch their video on the beer, but if you listen to brewmaster Jill Vaughn closely, it does sound like this beer was at least partly motivated by the latest fads.   Maybe no matter how hard they try to be just about the beer, the big corporate instincts kick in and they can't resist them.  Anyway, just click on the video above  to see it for yourself.

My fellow beer geeks can sneer all they want at Shock Top, but Shock Top is a brand of ideas that results in mildly satisfying and at times shockingly good results.  You could argue that Shock Top's ideas amount to chasing fads, but if you don't think a lot of craft brewers are trying to copy each other's success, you just haven't been paying attention.
at March 20, 2014