Does “Down to Earth” replaces "Bitter American" in your line-up?
Yes it does. We first brewed Bitter American at our small San Francisco brewpub in 2006 and then canned and distributed it in Spring 2011. At the time it was labeled as a “session ale” but it was always an easy drinking IPA. Back then the style “session IPA” was not part of the craft-brewing world.  When we were designing the Bitter American package we were thinking "Who is the bitterest American?" and after lots of discussion and beers we decided it was Ham the space chimp who was the first American in space back in 1961 as part of the early US space program. Here was a chimpanzee that was plucked from the wilds of Africa and trained to push buttons, strapped to a rocket and hurled into space. Not fun for little Ham and the imagery seemed appropriate for Bitter American with Ham floating in space above the Earth. After a number of years we decided to go back and look at the package and make a couple of adjustments, one being labeling the beer exactly what it is, a “session IPA.” Once we went down that path we thought it would be fun to play with the package design and continue the story of Ham. The new name turned into “Down to Earth” and we brought Ham back home from space to a sunny beach, relaxed and stretched out in his hammock made from his space capsule’s parachute. Down to Earth is, as its predecessor, 4.4% ABV and easy drinking. 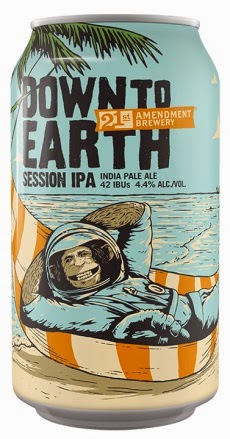 Did you modify the Bitter American recipe or start over from scratch?  Can you describe the development process?
The recipe changed but not by much. In "Bitter American" as with "Down to Earth" we use Golden Promise pale malt from Simpson’s Malting out of the UK. Golden Promise gives this lighter beer a supportive malt backbone. Golden Promise malt is used in English session beers to maintain body and still keep the beer lower in alcohol, which can be a challenge as you’re brewing with less malt when there’s the possibility for a thin watery beer. This pale malt provides body, without a lot of sweetness, which I prefer as it avoids the competition between malt and hop flavor and bitterness in your mouth.

For “Down to Earth” I left the upfront bittering hops the same and changed the late or flavor hops as well as the dry hops.  Craft beer drinker’s tastes have evolved and so have mine. I saw "Down to Earth" as an opportunity to mix it up and look into newer hop varieties.  In “Down to Earth” I added a lot more late kettle additions with Cascade and Mosaic hops giving the beer a more chewy citrus flavor and then dry hopped it with Centennial and Mosaic hops adding pine, citrus, mango and tropical aromas.

Mosaic is a relatively new hop and Centennial is an older craft beer workhorse hop.  The combination is great with the marriage of new style and old school hops.

How’s the new brewery going?
What’s exiting about opening our new brewery in San Leandro is that we have the opportunity to really stretch our creative wings and put out more beers and in interesting packages. We are installing a 100 barrel German brewhouse, manufactured in Hudson, Wisconsin. Both my business partner Nico Freccia and I have always had the dream of bringing the beer home to the Bay Area. We’ve been brewing with our partner brewery in Cold Springs, MN since 2008 and that’s been great for us and we’ll continue to brew with them. With the new new brewery we’ll be able to make new beers and delve into different package sizes as well as variety packs. Our San Leandro brewery will be a destination location with a tasting room, outdoor seating and the ability to see and enjoy the entire process from brewhouse to the state of the art canning line. In addition, it’ll allow us to open up new markets. We recently launched in Chicago and we’ll soon be distributing this Summer to Southern California. It’s a great time to be involved in craft beer.