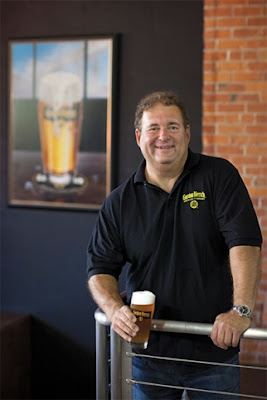 Craft beer is hot. Lately, cider has been even hotter. The Beer Institute reported US cider production more than tripled between 2011 and 2013, from 9.4 to 32 million gallons. In 2014, Nielsen reported off-premise cider sales grew by 71% in 2014. While cider sales among the nation's largest brands have slowed in 2015, cider has firmly established itself in our nation's beverage landscape with many new cideries both large and small getting into the action.

So perhaps it's no surprise the Gordon Biersch stepped into the cider area with their newly released WILDCIDE. Of course, most people aren't all that interested about a brewery diversifying its beverage portfolio, they just want something good to drink.

So exactly how did WILDCIDE come about and what else can we expect from Gordon Biersch's cider venture? I asked Dan Gordon, Gordon Biersch's Co-founder and Brewmaster about the genesis and his future plans for WILDCIDE in an e-mail. Here's what he had to say.

BR: Why did you decide to start producing cider?

DG: I made the decision when the laws changed a couple years ago allowing me to get a winery license. Also, after reading the back labels of the major producers and seeing there wasn’t a 100% all-natural hard cider I could find made from fresh pressed juice without additives.

BR:Take us through the process to blend the different apples to get the flavor you were looking for. How many test batches did it take?

GD:The most important element was using fresh pressed apple juice. That was the key to capturing the aromatic qualities of the apple. By using fresh pressed juice, we were able to achieve a very aromatic flavor profile and fruitiness while keeping it dry with a crisp body. Many of the large producers are using concentrate and nearly everyone uses sulfates. We don’t use either.

The blend of apples was designed to have the right amount of fermentable sugars, acidity and aroma.It wasn’t rocket science. The magic comes in how we control the fermentation rate and dialing in the residual sugar to 1.15%. That’s the challenge. Selecting the apple formulation was the easiest part.

DG: It is all about controlled fermentation to get it consistent. It is a different approach than beer but equally satisfying.

DG: To the contrary, I think we’re applying the spirit of the Reinheitsgebot philospohy to cider. We use one ingredient: just fresh pressed apple juice. Making a great cider as pure as possible is exactly what the Reinheitsgebot is to brewing.

BR: Did brewing something like WILDCIDE involve a lot of soul searching or was it more a "let's go for it" thing?

DG: No soul searching was necessary. We needed to broaden our horizons and it has been a blast. I really am a fan of our hard cider and have it on tap at home.

BR: Do you have plans for other cider versions (pear?) or other projects in the works you can talk about?

DG: We will be doing some flavored ciders but not really flavors you would expect. The philosophy is to make it delicious and not try to make statement with esoteric flavors.