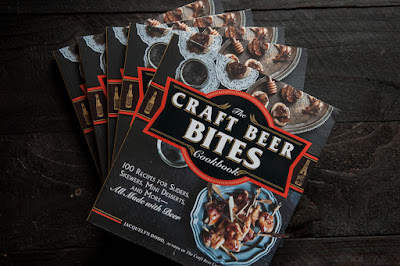 And now friends, it's time to share my thoughts on a couple of beer and food books by two leading innovators of putting beer and food together, Jacquelyn Dodd and Schuyler Shultz.

"The Craft Beer Bites Cookbook" by Jacquelyn Dodd is a follow-up to her highly successful first effort "The Craft Beer Cook Book", which I  highly recommended a couple years ago. Here, the emphasis is on using beer as an ingredient to enhance the flavor of appetizers, dips and other small bites. In her accessible and conversational writing style, Dodd lays out a wide range of recipes which all include beer. While they seemed easy enough to follow, there was a bit of a devil in the details.

For example, the "Belgian Ale-Marinated Grill Steak Crostini with IPA Chimichurri" recipe calls for marinating flank steak in a mixture of Worcestershire sauce and Belgian ale. Hmmmm.....what Belgian ale to use?  I mean, what constitutes a "Belgian ale" is awfully wide open. In the "Choosing the Right Brew!" sidebar accompanying the dish, Dodd recommends using "a sweet Belgian ale" so the malt caramelizes on the grill.  That really doesn't narrow down the expansive Belgian ale category much, but I ended up using Allegash Dubbel and lucky me, the marinade imparted an excellent flavor to the steak. The lively IPA Chimichurri sauce worked fantastically with the flavorful marinated meat, the results being spectacular.

A few days later, I made the "Parsley White Bean Beer Cheese Dip" for some friends who invited our family over to watch a football game. Could I make the dip the night before and serve it for the game the next day without the flavors going bad?  Unfortunately, there's no mention about how long the recipes keep for, good information many other cook books include. The recipe called for one can of Great Northern White Beans.  Should I drain the beans, or dump the whole can in? The recipe didn't say what to do here either. I decided to drain half the liquid from the beans and the resulting dip was a little watery.  Adding some extra Parmesan and cream cheese fixed that. (Note to self, drain the beans next time.) The resulting bean dip was excellent, the IPA adding a nice bitter counter point to the fresh parsley and bean flavors.

I could probably pick a few more nits with the recipes, but that would be missing the point. I've made several of Dodd's recipes from both of her books, and the worst ones turned out pretty good.  Many were simply excellent. Next time youre invited to a party, bring something made from Craft Beer Bites and chances are pretty high you'll be a hero for the evening. 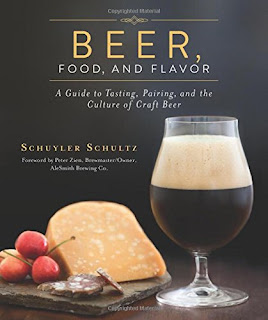 Then there is "Beer, Food and Flavor" by San Diego chef Shuyler Schultz. As you might expect from the title, much of the book is devoted to beer and food pairings. I must confess to find most beer and food pairing discussions either hopelessly clinical or so technical only a hard core foodie can understand it, both approaches taking all the fun out of the whole deal. As far as I'm concerned, all beer pairs with pizza, and a good beer with any meal makes it better.  When early in the book, Schultz declares, "The nature of beer is adaptable enough so that you're likely to come across only a few truly disastrous pairings. Most often a pairing of random food A and random food B will yield an adequate, enjoyable experience," I realized Schultz was my kind of guy.

Schultz does his best to make his treatment of beer and food pairing accessible and fun. Most of the time he pulls it off.  Examples from various beer tasting menus he's prepared are used to good effect. Schultz has travelled all over the country meeting brewers and tasting beers and it shows on the pages. You feel the presence of a true culinary expert happily sharing his vast experience in an unintimidating fashion.  Still, he sometimes can't help using sentences like,"Deeper analysis reveals notes of yuzu, pine needles, and eucalyptus leaf" as he does in describing Pliny the Elder.

Is this book a beer and food pairing guide, an introduction to craft beer to the culinary inclined, or a guide for restaurateurs to develop their own beer paring menus? It's all of this and more with the dense, somewhat unfocused nature of the book coming across as a great big data dump.  But it's a data dump from the mind of someone who's spent his career thinking deeply on how beer affects our perceptions of food and has worked with some of the greatest brewers in the country.  More importantly, there's a genuine love for craft beer and all that it stands for which creates a lightness that overcomes the heavily worded pages. The road Shultz takes us on in an interesting trip worth exploring.