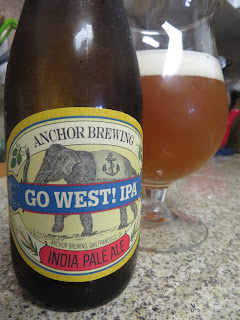 Running a marathon, plus lots of work and family commitments have slowed down my beery explorations lately. However, I've still had time to sample some new brews to ramble about them in my little corner in the online world. So let's get to it!

We'll start with Anchor's new IPA foray, Go West!. Anchor has an interesting history with IPA's. Anchor arguably launched the whole IPA thing in America with their Liberty Ale.  Even though it was released in the 1970's, Liberty Ale still holds up today as a strong example of the style. A not so strong example of the IPA in my seldom humble opinion is Anchor's unnamed IPA, which I find rather timid  and underwhelming. There's no such problem here, Go West! hits all the classic West Coast IPA notes, full of punchy grapefruit and pine flavors, and a slightly resinous finish. Presumably, the marketing folks at Anchor hope an exclamation point does a lot more for this beer than it did for Jeb Bush. 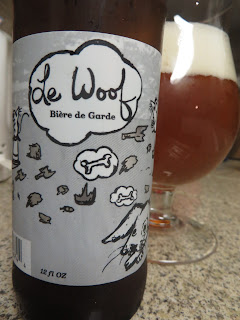 Next up, Le Wolf Biere de Garde from Chicago's Off Color Brewing. I found this toasty, yeasty, estery concoction just a real pleasure to sip. It's a little on the sweet side, and at 7.3% abv, offers a real kick. Fruity esters dominate. I picked up some apricot and peach, but it was more one unique flavor not easily broken down into components.  A few folks on Beer Advocate noticed pear. It's one of those beers you can analyze for hours, or one you can enjoy without thinking about it at all.

Last, but hardly least is Almanac Farmer's Reserve Blueberry. Ho hum, Almanac put out another excellent barrel-aged brew. Almanac first brews their house sour ale, and then racks it to a secondary fermentation in wine barrels filled with Northern California blueberries. There it sits for a few months, picking up the blueberry flavors and a nice purply color. Sipping the result, the blueberries served as a light accent to the wine, oak and moderately strong sourness. It's balanced, all the flavors playing nicely together rather than popping out on their own. What else can I say, it's another example of the usual Almanac magic. 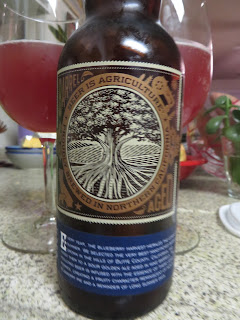