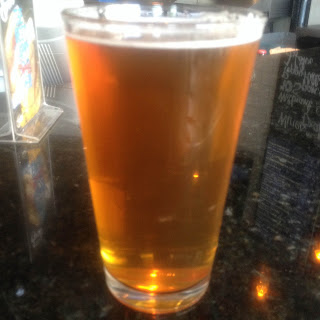 Time again to ramble about the new and interesting beers discovered in my various travels.

I'll start with Golden State Brewing's Heritage Honey Ale. Golden State Brewing recently opened up shop in a low key, industrial park in Santa Clara just west of San Jose Airport. Heritage Honey Ale is their flagship brew, and I understand why. This light ale has nice, subtle floral characteristics, presumably from the honey and earthy finish. The honey doesn't add any sweetness, but gives the malt a little backbone in this unique brew, which has more going on in it than you might expect. Beers like this are underrated, and I'm a fan of this one. 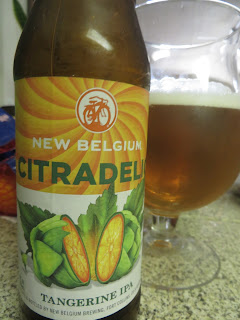 Next, we come to Citradelic Tangerine IPA from New Belgium.  My first glass of this was rather underwhelming. Oh, it was tangeriney to be sure with lots of nice citrus aromas but the hops in this brew seemed dialed down and I missed their bitter punch. Then a couple days later, I had another one and began to get the idea. The tangerine fruit works well with the Citra hops, the malt serving as a sufficient counter-balance but mostly staying out of the way, the emphasis being more on flavor than bitterness. The citrus flavors don't really pop, but maybe that's a good thing as this is a rather pleasant, unobtrusive, sessional type IPA's at 6.0% abv. Hop heads will likely search elsewhere for their lupulin fix, but I can see this being a really popular IPA for the other 98% of the population.


We'll end with Villa Street American Red Ale from San Jose's Hermitage Brewing. It's named after the street in downtown Mountain View where Hermitage's sister brewery, Tied House has been located since 1987. Now that we have that out of the way, this red ale has a rather thin malt base, checking in at only 5.0% abv. The caramel or toasty character from the roasted malts are simply blown away by all the piney, fruity (do I taste mango?) hop flavors, resulting in a rather unbalanced, one-dimensional brew. It's got some nice piney and citrus aromas from the dry hopping which I liked, and the hop flavors work at a certain level, but just completely overwhelm this brew. This didn't bother my wife, who loved this beer for the exact same reason. 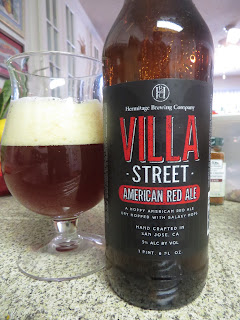