Hop Growers Outside the Pacific Northwest Face an Uphill Battle 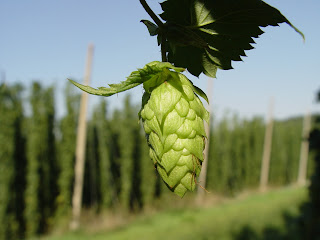 In a recent post, I raised questions about whether different brewing regions in the United States could ever achieve their own unique terroir. I'm not talking about unique brewing styles, but a distinctive flavor born from hops and grain growing in the regional climate from the unique soil composition.

Currently, 95% of all hops grown in the United States comes from jsut three states: Washington, Oregon, and Idaho. Thus, if brewing hotbeds like Northern California, San Diego, Colorado, North Carolina, Philadelphia, and New England were to ever develop their own unique terroir, hop farming would have to develop in these new areas as well.

Why did hop farming become so concentrated to a small region of the country in the first place?  Is it be possible to develop reliable hop supplies elsewhere in the United States?  And if hops were grown extensively in other regions, would beer brewed from locally sourced hops taste any better?  Or worse? To help answer these questions, I spoke with Economics Professor Thomas Marsh of Washington State University, who heads the university's IMPACT Center which studies the local agriculture in the state of Washington, and has published research on hop growing issues.

Why has hop growing in United States become so concentrated in the Pacific Northwest?

"When hops first started being grown in the United State, they were grown on the East Coast as well, but were susceptible to disease," explains Marsch. "Hop farming migrated to the arid regions of the Pacific Northwest which kept them protected from diseases and where the growing micro climate could be better controlled."  Professor Marsh also noted there are many other industries in the Pacific Northwest which support hop farmers that don't exist in other regions.  "Most of the hop post-processing facilities that convert hops into pellets or extract oils are in the Pacific Northwest".  In addition, hop farming is actually very labor intensive. A local labor force experienced in growing and harvesting hops is a big asset to Pacific Northwest hop farmers.

What are the barriers to growing hops in other regions of the country?

Professor Marsh cited several economics barriers that would need to be overcome to create new hop growing regions.  "It takes $5,000-$10,000 per acre to develop a hop farm and production costs are $6,000-$8,000 per acre. It takes about three to five years to get a hop farm up and running. Hop contracts are typically 3-5 years long as well and 90% of hop farms work under contracts."  Thus, a big part of the challenge in establishing a new hop farm is meeting the obligations hop contracts which are the essential currency in the industry.

"The big thing is getting a hop contract," explains Marsh.  "A brewery wants a reliable supply of hops, so it's hard for them to commit a contract to a new farm.  On the other hand, there has to be some certainty for the hop grower to get the required revenue to get a farm growing.  So there is a bit of chicken and the egg issue. Of course, lots of breweries would like to use locally grown hops."

How do you overcome these barriers?  Could the hops grown in new region have desireable flavors?  Or could they taste worse?

"It’s an open question how growing hops in new regions will affect the qualities of the hops. We did an experiment where we grew a hop variety under normal growing conditions in one field, and in a nearby field, we intentionally created “chafed” conditions which you might see in a drought.  We brewed beer with each batch and found consumers were able to differentiate between the two and recognized the beer brewed with the hops grown in normal conditions was better than the hops grown under chafed conditions. I addition, we were able to show that consumers would be willing to pay more for beer brewed with higher quality hops"

For those eager to see hops grown in new regions, this study is both encouraging and cautionary. Suppose hops grown in Minnesota have some new, wonderful characteristic extracted from the Minnesota soils. This would make those hops desirable and consumer demand would help support a fledgling hop economy in Minnesota.  But if hops grown in Minnesota just didn't taste as good as hops grown in the Pacific Northwest, beer drinkers would notice, would tend to buy other beers instead and efforts to develop hops in the region could die out.

Are there any particular regions of the US where a potential for large scale hop growing could emerge?

Professor Marsh has noticed small scale hop growing beginning to migrate to other parts of the United State."If you used to Google “hop association”, all you’d find was USA Hops."  (USA Hops is the leading hop growers association in the United States.) Now you’ll find hop associations in California, Michigan, and a few other places."

I Googled "hop association" myself and found local hop associations in San Diego, California, the Gorst Valley of Wisconsin, the Maritimes in Canada, Michigan, Minnesota, and Ohio. In some ways, this is not surprising. Lot's of people grow hops in their backyards all over the country. But growing hops in your backyard is a lot different than creating a profitable hop growing farm.  Today, some small breweries feature locally grown hops in limited quantities or special one-off releases. Will we ever get to a point where people compare and contrast flavors of Cascade hops grown in the Midwest from those in California? Will Stone Brewing ever nationally release "Cheese Head Ruination", a version of their popular Double IPA brewed exclusively with Wisconsin hops?  Maybe, maybe not. But it's encouraging to think these ideas aren't as far fetched as they were just a few years ago.