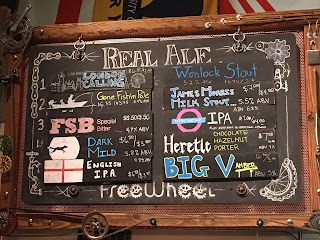 Recently during during my day job, I finished up with a customer visit at nearly 6:00 pm in Redwood City. With no desire to brave the sluggish highway 101 rush hour traffic on the down the San Francisco Peninsula into the Silicon Valley, I ventured for the first time into Freewheel Brewing. Freewheel takes a decidedly different take on beer than most Bay Area breweries in that they specialize in English-style cask conditioned ales.  With their light, pillowy carbonation, subtle tastes, and generally low alcohol levels, Freewheel beers are diametrically opposed to most of the uber-hoppy, everything but the kitchen sink alcohol bombs served up all over the Bay Area.

I have to admit English-style session ales take a little getting used to in the Bay Area's craft beer environment. My previous experience with Freewheel's brews were at a couple beer festivals, probably the worst way to sample them. Beer festivals are basically beer beauty contests. Everyone wants to stare at the voluptuous supermodels, that plain looking girl sitting in the corner gets ignored. But as we all quietly realize, she's often a lot more fun to spend the evening with than some self-absorbed diva. English-style ales aren't all that sexy but, as I discovered at Freewheel, they make a great evening companion. 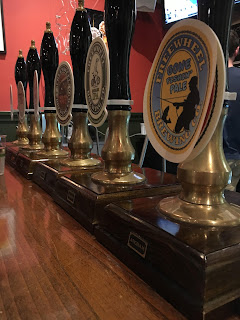 I have no idea whether Freewheel's beers are particularly authentic, having never been to England. But then, they don't have to be. As I worked through my tasting flight, it became apparent these beers had a different approach.  I've had plenty of English-style ales like Bitters, Milds, Stouts, and of course IPA's, mostly brewed by American breweries who felt the need to impose their own unique stamp on them. The Freewheel beers seems a bit more dialed down, and in some way, to the right volume. The brews seemed right at home with my plate of fish and chips, not competing for my attention. My surroundings were full of casual chatter in the tightly packed brewpub, the large groups suggesting this was a pretty popular neighborhood hangout.

I have to admit I still don't quite get why the English can be so fanatical about their cask conditioned ales. Freewheel gave me some insight as to why. 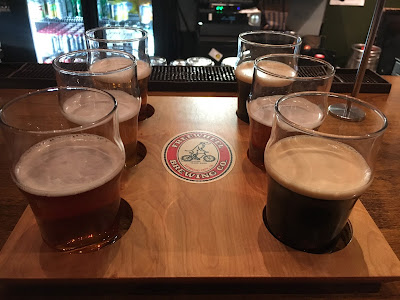