Aaarrr! Black Ship Pirate Stout is a Keeper of a Recipe 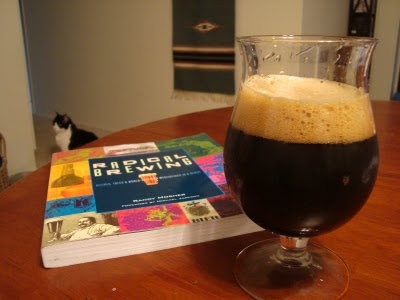 Talking like a pirate is one of those things that's pretty entertaining for about 20 seconds, and then gets really annoying pretty quickly after that. So I won't attempt to write like a pirate, and spare you the tedium of reading something barely readable. Of course, most pirates were probably illiterate, or wrote in languages barely recognizable today. And they probably didn't go around saying "Aaarrr!", either.

So I'll get to the point and tell you the Black Ship Pirate Stout, from Randy Mosher's great home brewing book, Radical Brewing is an absolute keeper of a recipe. It's my first "Damn, did I brew that?" moment in the six batches I've made since starting home brewing a year ago. Here's the recipe, from page 200 of my copy of Radical Brewing.

At end of boil, add 1.0 ounce crushed coriander, 1.0 teaspoon of allspice, and 0.5 teaspoon of ground black pepper. Post fermentation, zest of an orange or tangerine soaked in vodka for 24 hours, and added at bottling.

-There's an all grain recipe for this as well in Radical Brewing. I just haven't taken the all grain plunge yet.
-I actually ended up using Fuggles as the 90 minute bittering hop, as a substitute for the Styrian Golding, since that's what they had at my local home brew store. I used Tettnanger hops at 30 minutes, since I picked up the wrong package. Mosher describes Tettnanger as a great aroma hop for wheat beers, so I was a little concerned how this would work out in a completely different brew. I say it worked out all right.
-I used orange zest for this recipe, but would like to try tangerine next time,.

My greatest fear brewing this was that all the different additions, the molasses, four ounces of hops, and the different spices would produce a harshly bitter and cluttered brew. It actually turned out surprisingly smooth and drinkable, with a slight sweetness and spicy zip, the molasses noticeable but hardly overwhelming, and everything blending nicely into all the roasted malt. The orange zest gave it a really nice citrus aroma.

Talking like a pirate gets old really fast, but I could drink this all day.
at August 17, 2010