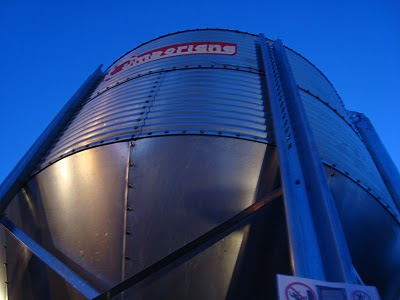 It towers over the city of Belmont casting long, ominous shadows. Startled airline pilots swerve out of its way as they land their aircraft onto nearby San Francisco International Airport. UFO sightings along the San Francisco Peninsula have tripled. And if you've driven down Highway 101 near the Ralston exit and looked westward, you can't help but see it towering over the small industrial park where Devil's Canyon Brewing is located. Just what is it?

Linda and I decided to spend last Friday solving this deep mystery and grab a couple pints at Devil Canyon's Brewing Beer Friday, an open house Devil's Canyon holds the last Friday of each month. Turns out this shimmering tower of metal is a humble grain silo. I spoke for a few minutes with Daniel Curran, Devil's Canyon's VP of Sales and Marketing, who told me the new silo halves their grain costs, as they can now buy grain in much higher volumes with the increased storage capacity of the silo. Cutting costs by increasing volume? Well, that sounds something like a mega brewer ABInBev might do. But hey, craft brewing is a business, and as a business, any craft brewer to find ways to keep costs down to stay competitive, just like ABInBev. But since grain has a pretty long shelf life, I'm not too concerned about a drop in Devil's Canyon's overall product.

But what is very un-ABInBev-like is that Devil's Canyon maintains and cleans all the tap lines wherever their beer is sold, making the extra effort and expense to maintain the quality of their product at the point of sale. Having experienced excellent beers such as Sierra Nevada Pale Ale, Sam Adam's White Ale, and Anchor Steam ruined by a stale cheesy flavor introduced as the beer flowed through a dirty tube into my glass, trust me, this is good to know.

Linda and I also checked out Mayfield Brewing that evening, which is located in the same industrial park not less than 50 yards away. I've heard a lot about Mayfield, but never had the chance to check out their beers before, especially since the $30-$50 a bottle pricing was a little too steep for my recession limited wallet. The good news is they were serving 4-5 ounce tastings for a more affordable $5.

Mayfield's claim to fame is aging their beers in used wine barrels, infusing a lot of wine and woody characteristics into their beers. For a couple of the beers we tried, this created an interesting, unique, and complex drink. But notice I didn't use the word "tasty", because with the Iconoclast Aurora, and Iconoclast Eclat, an Alt Beer and IPA aged in Zinfandel and Cabernet barrels, this process seemed to create a forced marriage of flavors and the resulting liquid seemed to have a bit of a identity crisis. Linda, a big IPA fan, really missed the floral aroma found in a good IPA, which seemed to be sucked out of the brew from the barrel aging process in the Eclat.

There were no such problems with the Iconoclast Nocturna, an Imperial Stout aged in Syrah barrels. Maybe that's because Syrah and the chocolate notes of the Imperial Stout are a more natural pairing, or the smoky, woody, and vanilla notes that the brew seemed to pick up from the barrel aging effortless pair with the chocolate and coffee notes of the stout. No "acquired taste" required to enjoy this one, which was one of those beers that make you sit up and say "Wow!". Linda and I gladly spent $30 on a bottle of this stuff.

Only about 25,000 people live in Belmont, and yet it's home to two craft breweries. I think we're going to like living here, despite all the strange goings on from time to time. 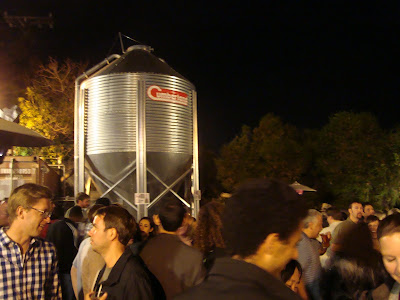