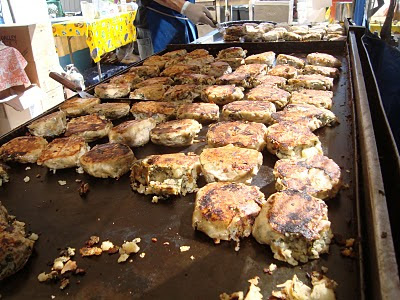 The Eat Real Festival, in it's third year, seems to be hitting its stride. It's a great concept, a celebration of locally produced street food, with a beer shed featuring a good selection of Bay Areas breweries, held every year at Oakland's Jack London Square. Last year, the festival seemed a bit sparse with few seemingly authentic street food vendors, and a few decidedly non-street food vendors selling things like frilly cupcakes and creme' brule. This year, the crowds were decidedly bigger, and street food definitely ruled.

It's was a great opportunity for Linda and I to try some local beers, then go out and try a little of this, a little of that from the bite size servings the various street vendors were serving, before going back and trying another beer. Repeat as desired.

Of course, any taco truck advertising "Kung Fu Tacos", described as containing the spirit of Bruce Lee, is going to get my attention. While they didn't cause me to exclaim "waaaaaaaaAAAAAAAHHHHHHHHHHH" and deliver a flying kick, the Asian marinated chicken and Mu Shu vegatables worked pretty well in a taco. And then there were those Philippine pork sliders Linda and I enjoyed. Somehow, this melting pot cuisine where Asian foods are served in Latin and American methods of tacos and sliders seemed natural and unforced. 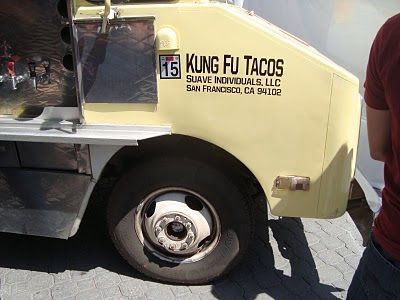 But let's talk about the beer. Plenty of Bay Area breweries could be found at the beer shed, which supported no fewer than 40 taps. Every hour, a different Bay Area brewer was on hand to pour their beer and talk about it. I wasn't able to uncover any profound secrets from any of the brewers, but there's something about talking directly with the person responsible for the brew. So here's a few notes of some of the more notable, at least to us, beers we tried.

Rye'd Piper from Ale Industries
This somewhat rich tasting, dark brown colored ale has a strong rye presence. The rye blends well with the roasted malt, and there's this slightly herbal and astringent finish. Not a lot complexity here, but with a name like "Rye'd Piper", you would expect big rye flavors, and this beer delivers. Mission accomplished.

L'Enfant Terrible from Social Kitchen
Social Kitchen Brewmaster Rich Higgens describes this as a table Belgian Ale. This was has a light roasted chocolate a fig character, with a little spicy character from the Belgian yeast, and yet this flavorful, complex brew checks in at 4.5% abv. Nothing like finding another nifty session beer.

Saisson from Ondonata
Ondoonata is a Sacremento area brewery that opened last year, and after tasting this effort, it looks like they are going to be around a while. Their Saisson is a little lemony, slightly bready, and a little spicy peppery finish, all adds up to a great, refreshing summer beer.