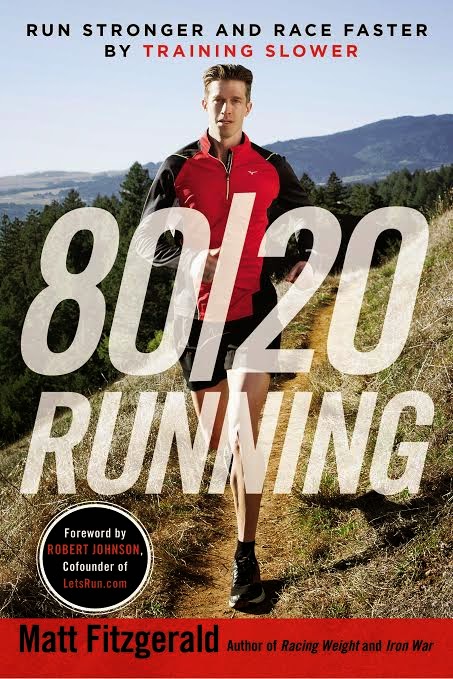 Matt Fitzgerald's latest running book, "80/20 Running" is not so much a running book but a detailed argument on how to train.  Its central thesis claims optimal training results are obtained when 80% of a runner's miles are completed slowly enough to carry on a conversation, which Fitzgerald terms the ventilatory threshold. Running faster than this, which most runners consider key to improvement, should only consist of 20% of total mileage volume.  Most runners, Fitzgerald argues, have this ratio out of whack, running too many miles above the ventilatory threshold and counter-intuitively, all this hard training is stifling improvement rather than promoting it.

Fitzgerald cites an impressive amount of research conducted on both elite and recreational athletes to back this up and presents a pretty compelling case for an optimal 80/20 ratio of easy to hard running for achieving the best race results.  Elite runners have intuitively recognized this ratio for decades according to Fitzgerald, while most recreational runners run too many of their miles fast, resulting in long term fatigue and insufficient recovery for optimal improvement.  However, the book's appealing subtitle "Run Stronger and Race Faster by Training Slower" only tells half of the story.

The other side to this story is that Fitzgerald is also advocating higher training volumes in his programs conducted at sub-ventilatory pace while maintaining this 80/20 ratio, so perhaps a book subtitle "Race Faster by Training Longer" would be more honest.   For runners with little time on their hands, Fitzgerald's revelations will likely present a bit of a dilemma.  The good news is that the author realizes each runner is different about how much time they can commit to a training program. Fitzgerald wisely tailors his ideas to runners at different levels of experience and commitment.  And make no mistake, Fitzgerald is a firm believer in hard workouts.  He just doesn't think running more than 20% of our miles at a pace faster than we can hold a conversation, whatever our overall training volume is, does us much good.

Fitzgerald helps make it pretty straightforward to find out ventilatory threshold pace, as well as a finding other key training paces to integrate into a training program.  I've read no better advice in formulating a training plan than Chapter 7 where Fitzgerald present's the "fine print" to the "80/20 rule" in the form of seven sub-rules.  The book is not for those seeking to finish their first 5k or 10k, but any runner looking to improve their current performance should get a lot out of 80/20 Running.

I often rate a running book by how it affects how I run.  Analyzing my own training after reading 80/20 Running, I found that I'm was doing too high a ratio of fast to slow miles per the 80/20 rule.  My ratio was more like 75/25 or 70/30.  So I've added a few sub-ventilatory miles here and there, increasing my overall weekly miles and sometimes, have cut back a little on my hard runs. Three weeks of modification is not really enough to gauge the effectiveness of a training plan, but so far I seem to be making reasonable improvement yet still feel pretty fresh.  This is something I'll likely revisit after the half-marathon is over to better gauge how moving closer 80/20 actually helped.

The provocative and slightly misleading sub-title aside, 80/20 Running is an excellent guide book in finding your way to run faster.
at September 18, 2014