Cashing out at the Folsom Blues Breakout Half-Marathon 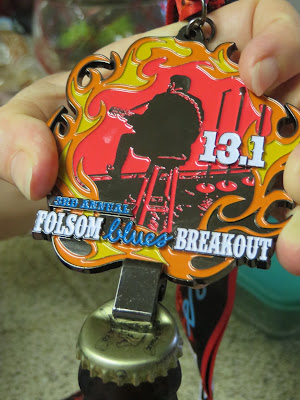 No, I didn't have a breakout performance at the Folsom Blues Breakout Half-Marathon. It was more like early parole.

As you might guess, this race starts near Folsom Prison on the Johnny Cash Bridge. After a couple downhill miles, it winds along the American River bike trail and finishes in historic down Folsom. Any race featuring the music of Johnny Cash with a finisher's medal that doubles as a bottle opener is my kind of race.

I had mixed thoughts going into it, as my preparation was a little cobbled together around a fair amount of personal and professional travel and a bit of lingering fatigue that I chalked up to over training to compensate for missed time. Or maybe it was just old age. The plan was to shoot for 6:40 mile pace through 10 miles and assuming I got to the 10 mile mark at that speed, I figured one of the following would happen:

a) I'd feel great and blitz the last 3.1 miles
b) I'd hang on and hold pace to the end
c) I'd fall apart and crawl to the finish

The first couple down hill miles did indeed feel easy at 6:25-6:30 pace. By the time I got to mile 4, back around 6:40 mile pace as the course flattened, my legs felt OK, but started dropping subtle hints the last few miles were not going to be fun.

At mile five, a couple young whippersnappers caught up to me. One sported winged tattoos on his legs and sleek looking sunglasses perched on his closely cropped blond hair while the other guy had long, wavy black hair tied back and was huffing and puffing like a steam train. I didn't think anyone sounding like a steam train at mile 5 was going to last very long in a half-marathon race, so I moved ahead him, got right behind the guy with the sunglasses and held on. I was right, and didn't see the huffing and puffing steam train guy much after that. I just kept looking squarely at the back of the other guy's red singlet for the next few miles that I covered in the 6:30-6:40 range.

So I hung on and used him as a wind blocker for the moderately strong breeze blowing off the American River under an overcast sky. Sometimes he'd pull away, but I'd reel him back in. I thought he'd finally lost me on the windy uphill portion just before the bridge to cross the river at mile 7, but worked myself back within striking distance on the next down hill mile. At this point, I had this idea about catching up to him so I could turn to say to him "I'm not that old".  Such ideas were not to be as he started pulling away. Yes, I did get to mile 10 slightly under 6:40 mile pace and while I didn't have crawl to the finish line, it took plenty of scratching and clawing to get there in 1:27:57, at an overall 6:42 mile pace. So I guess you could say after getting to mile 10 just under a 6:40 mile clip, I accomplished (b) and still clung to the pace. Well, sort of.

Special mention mention goes to my wife Linda, who endured a hip injury training for the half-marathon. Battling through it she recovered to enough run 5k run instead of the half-marathon and ended up winning her age group in the 5! She worked hard through some pain and really deserved it. Yay Linda! 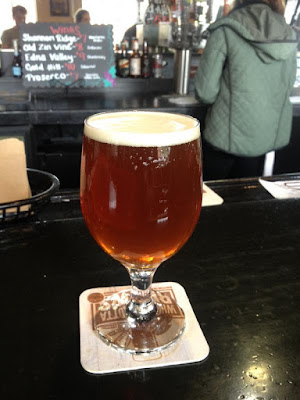