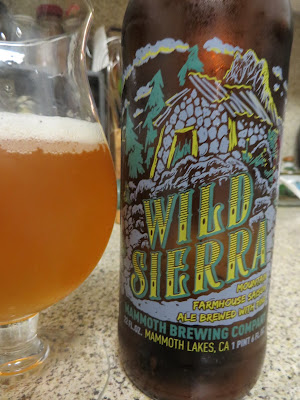 Time once again to review some of the more intriguing brews which crossed my path.

First up, Wild Sierra Farmhouse Saison from Mammoth Brewing Company.  Our family's fall annual camping trip to Yosemite is not complete with picking up a few Mammoth brews at the Yosemite Valley store, since in and around Yosemite National Park is the only place you can find Mammoth's beers. In this one, the fruity esters with plenty of apricot character blend well with the moderately toasty malt. Mammoth Brewing adds local pine needles to the brew, literally injecting the piney breezes of Yosemite into the mix, creating a clean freshness in the brew to bring it all together. Be forewarned, packs a bit of a punch for the style at 7.5% abv, yet I found it wondrously stimulating and refreshing sipping this on my front porch.

For our next beer, we turn to the dark side. It's Ninkasi's Noir Milk Stout with Coffee, part of Ninkasi's Special Release series which the brewery sent over for a sample. Upon first sip, I detected the usual rich, creamy, and roasty characteristics of this style. But as the beer warmed and the flavors opened up, dark under currents began to emerge. Buried deep beneath the strong dark chocolate and coffee flavors, came the faint sounds of hops, scratching and clawing to break free. This is no easy sipper, it's a compelling conflict in a glass as the characters struggle for flavor dominance in the darkness. An arresting experience. 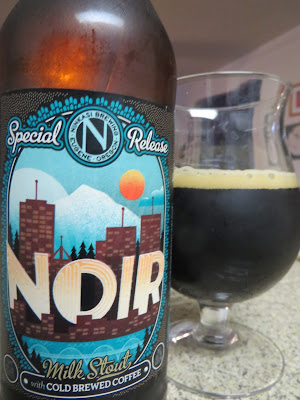 Finally, beer karma compels me to write some nice things about Cucapa Cerveza since they apparently sent me some of their beers to sample. I say "apparently" because one day coming home from work, I find this big box on my porch and inside are 20 bottles of their different beers. No one wrote me from the brewery ahead of time asking me to try a sample, nor was there any letter in the box. For the most part, I enjoyed all the different beers from this Mexican brewery, which all had their own soft earthy quality to them. Of the bunch, I found their Runaway IPA highly exotic in its unabashed malt-forwardness. You can tell it's an IPA with its noticeable floral, earthy bitterness poking through the slightly sweet malt background.  Maybe that's just the way they do IPA's south of the border, but I really appreciated how they resisted the temptation to smack you in the face with a bunch of hops like only 27 zillion other IPA's do. Refreshing in both its restraint and soft edges, while it's not mind blowing, this IPA's may well force you rethink the possibilities of the style. 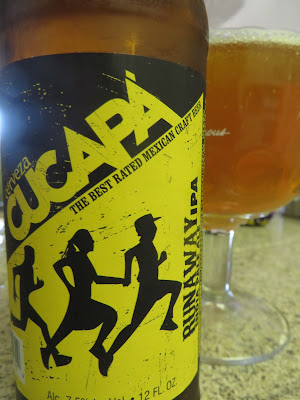