This edition of Rambling Reviews features beers from three breweries who successfully persuaded me to sing the praises of their beer to the millions of readers of this blog tuning in breathlessly to learn what beers they should be drinking. That's right, today's reviews are all about free beers sent to me in hopes I would write nice things about them.

We'll start with long time San Francisco brewery Magnolia Brewing, who want you to know their Kalifornia Kolsch and Proving Ground IPA can now be bought in cans, as they roll out their distribution in the San Francisco, Portland, and Los Angeles areas. That's right, no longer do you need to venture into the Upper Haight neighborhood full of stores selling bongs and Grateful Dead T-shirts to get a fresh pint of Magnolia. I've enjoyed a few pints of Kalifornia Kolsch and rather than go into a detailed flavor decomposition of the brew, let me just tell you this: It's a damn good Kolsch. As for Proving Ground IPA, Brewmaster Dave McLean describes it in a press release as "showcasing a hybrid approach to IPA, marrying an aggressive, American hop profile with an English malt backbone built around our favorite malt, Marris Otter." And indeed this brew has the wonderful solid biscuit-like malt and subdued, leafy, grass hop character one finds in a good English IPA, with some citrus in the background to remind you it comes from California. Magnolia's website claims this IPA checks in at 100 ibu's, but it seems more like 60 in this refreshingly well balanced brew. At any rate, it's not the usual West Coast hops and alcohol explosion. Instead, Proving Ground is a creative yet traditional dimension to the IPA style.

Then there's Sapporo Premium Black Lager. Now I've enjoyed Sapporo's regular Lager with sushi a few times, but it's never really been one of my "go-to" beers. Unfortunately, lot's of other people feel the same way about Sapporo, and they've faced declining sales in the US as the brand is largely limited to Asian restaurants. Sapporo Black Lager, released last fall, is an effort to reverse that trend, which explains in part why Sapporo touts their Black Lager for pairing with "traditional German, Asian, Cajun and Latin cuisines and crème brûlée". One thing going for it is lots of nice chocolate aromas. It's crisp with very deep roasted flavors on a broad spectrum from a little toasty up until the point burnt notes are detectable.  This good news it's mostly bitter chocolate flavors that dominate in the light brew. Nice beer, but will people choose to drink Sapporo Premium Black Lager with Wienerschnitzel or enchiladas? That seems like kind of a stretch.

Finally, we end with Alpine Beer Company's Windows Up IPA, which debuted just this year.  "I am especially excited for our newest IPA addition, Windows Up, to hit the market," excudes Alpine Head Brewer Shawn McIlhenny in a press release.  "It's got big hop aromatic and a really bold flavor profile with very little bitterness; this beer is a home run." Given that Alpine has made their reputation on big hoppy beers, it's no surprise this one is a real dank monster. The good news is there's plenty of complexity and depth to round out all danky, cannabis-ness character, with as some fruity apricot, light tart cherries and piney finish also in the mix. All those big flavors get plenty of support on a solid malt substrate. It's not just a beer crammed with a bunch of big flavors, it's an impressive composition of all those flavors.  Yes, I do believe Alpine hit one out of the park. 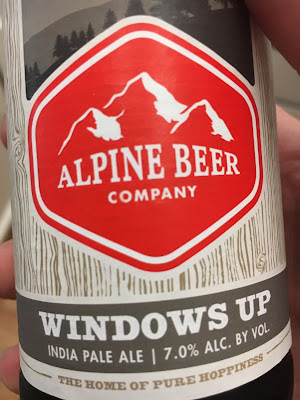