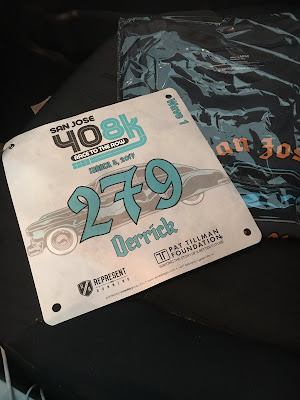 The year 2016 was memorable for so many reasons. Running-wise, it was a year I hit some running highs, but plenty of running lows in the form of injuries. As soon as my injured left hip recovered, my right hip would start hurting. For 2017, I've battled the flu a couple times, but simply running around relatively pain free has been a victory in itself.  The San Jose 408k, held last Sunday, was a chance to start the year to see just where I was at.

Named for San Jose's area code and 8 kilometers long, the point to point course starts at the SAP Center just west of downtown San Jose and finishes at the upscale Santana Row mall. A heavy overnight rain threatened to last into the morning and drench the race, but it died down once the sun came out, leaving the course under undercast skies and ideal running conditions. My modest goal entering the race was to hit 7:00 per mile pace, or 35:00 for the 4.97 mile course.

This goal was complicated by the fact that my GPS watch had some problem, or wasn't charged right, or something. It had trouble reaching the satellites and started flashing all sorts of warning lights and messages which I could read with my feeble eyes as I desperately stared down at it standing at the starting line. Whatever problems my watch was having, never worked them out by the time the race started and so I race the whole race having no idea of my time until the finish.

It was one of those run where I fought pretty hard to keep pace, but could never find a higher gear.  I just kept working over the course, until I turned down to down the Santana Row mall way, looked up and saw the clock ticking away at 33 minutes and something. Finishing with whatever sprint I could muster, I crossed the finish line at 34:13, way under my goal, or so I thought. Runners finishing next to me remarked their GPS watches had the race distance at 4.9 miles. Uh-oh. GPS watches typically overestimate distance by about 2% meaning the course was short. I'll just say I met my goal of 35:00 for just under 5 miles, and leave it there.