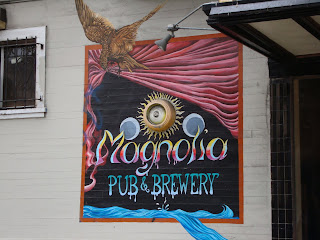 I must admit to being a bit of a tourist whenever I go up to San Francisco, having moved to San Jose from Detroit nine years ago. Linda and I try to take a day off from work once a month for a little exploring, and often we spend it in San Francisco. We've been talking about going to the Haight-Asbury neighborhood for sometime now, and yesterday we finally went. I had never been there, and was eager to see the neighborhood, a focal point of the 60's counter-culture revolution, that gave the world Janis Joplin's powerful soul, as well as The Grateful Dead's tedious banality.

As I suspected, Haight-Asbury is a good place to buy stuff like Tibetan crafts, Buddha statues, Jerry Garcia t-shirts, and ornate glass bongs. But I wasn't there for that. I was there for the beer at Magnolia Pub & Brewery.

We walk in and they're playing what seemed to be a 60's-era recording of Bob Dylan in concert, a promising sign. We take our seat at one of the large, black booths, and as it is our first time here, order a couple of their tasting flights. The menu looked interesting, but besides a couple of luscious cheese stuffed dates wrapped in bacon, we didn't order any of the food. Here's a brief run-down on the notes we took of the beers. 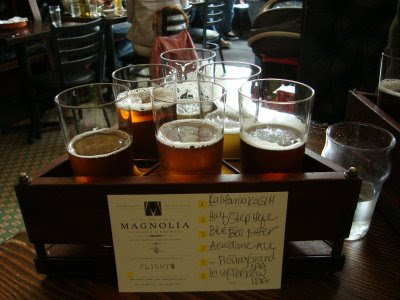 Kalifornia Kolsch
One of our favorite beers of the afternoon led off the flight. It's hazy yellow brew, with a strong peppery flavor and we also noted some notes of lemon. Despite the strong flavors, has a feathery lightness to it. Really nice.

Half Step Hefeweizen
Strong, rich bread dough like flavor, without the fruity esters one normally associates with the style. Maybe we picked up a little banana in there, but there was also a little underlying sourness. Still a good beer, but a reminder that California brewers seem to struggle with this style.

Blue Bell Bitter
A toast bomb? Lot's a toasty malt here, with some nuttiness to the overall flavor. Couldn't detect much hops here, but with all that toasty goodness, who needs them?

In the New IPA
This was a more restrained, balance IPA than one usually found in West Coast brewpubs, much more like the East Coast style. Had a citrus-like aroma, a grassy bitterness, and a decent amount of malt to balance the hops. Well crafted and balanced IPA's like this one are way underrated.

Proving Ground IPA
We're back on the West Coast with this one, and in a good way. Lot's a bitterness, at 100 ibu's, but there's more going on than just the brewer punching us in the face with a bunch of hops. We detected some aromatic spice notes and a little sweetness in the malt. Linda's is a big hop-head, so when we were done with the tasting flight, she had a half-pint of this.

Gallows Hill Porter
Part of Magnolia's summer long project to brew various beer styles using artesional Maris Otter malt, in collaboration with Teddy Maufe of Branthill Farms from Norfolk, England. Lot's of bitter roasted coffee bitterness in this one, with a really sturdy mouth feel to it. Sorry to miss the earlier releases of this project.

Afterwards, we walked down the street into the Lower Haight for an early dinner at Memphis Minnie's barbecue. I like the fact that they don't use any sauce in the preparation of the meats, but leave a few bottles of traditional barbecue sauce styles at each table for each person to add to their liking. Way too much barbecue is buried in sauce, but Memphis Minnie's puts their expertly smoked meats front and center. Inspired by San Francisco's multi-culturalism, Memphis Minnie's serves sake to pair with their barbecue, which we didn't try having been a bit beered out by the time we got there. Sure, Memphis Minnie's is located in barbecue Siberia, but having been to national barbecue shrines Arthur Bryant's in Kansas City, and Angelo's in Fort Worth, I assure those dismissing it as "hippie-cue", it's the real deal.

Linda likes taking photographs of flowers, so this shot taken as we walked back to the car seemed like the appropriate way to end this post. 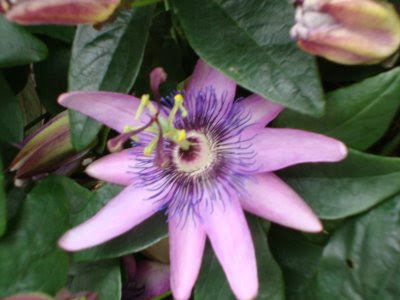