Pliny the Elder Comes to the South Bay 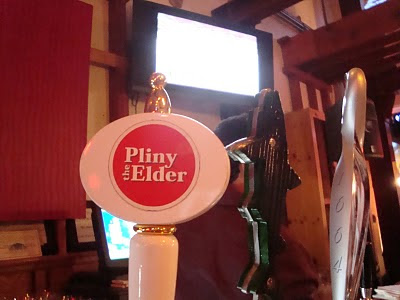 I suppose if you wanted to make a case that the South Bay is a beer wasteland, Exhibit A would be that arguably, the best South Bay Beer Bar is called Wine Affairs. But Wine Affairs is the first bar to find a way to bring the Russian River's rare and highly coveted Pliny the Elder on tap to the South Bay. And trust me, it took a lot of tenacity and effort by Wine Affairs to make this happen.

So the first night they had Pliny on tap, I rewarded Wine Affairs's investment of their hard earned money by spending some of my hard earned money by ordering a couple. It's a dirty job, but someone has to do it. And the good news is that the Pliny was pouring fast and furious the first night. Maybe the South Bay isn't such a craft beer wasteland after all.
at April 14, 2010