A Blustery Day in Santa Cruz 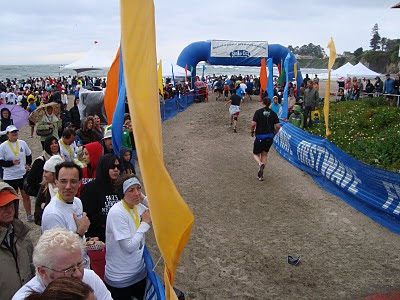 The Santa Cruz Half-Marathon must be a picturesque course on good days. It starts by the Beach Boardwalk, heads out along the Pacific Coastline, traversing along roads and trails on high cliffs above the ocean. But these great vantage points also leave you exposed when a storm rolls in from the ocean. So when a late spring storm crept across the Santa Cruz coastline the same morning as the race, gusty winds and rain was thrown into the half-marathon mix.

It's one of the things I love about running. The very complexion of the course changes dramatically by uncontrollable whims of weather. You have to be prepared on race day for whatever is thrown at you, and you never quite know what will happen. While I don't like running in the wind and rain, there's a heightened sense of accomplishment at the end when you've overcome these additional barriers. When you think about it, life's personal and professional struggles are rarely carried out in pristine, clinical conditions. Many times, the things we deal with come are messy, complicated, and sometimes down right chaotic. Running isn't any different.

And so after Linda and I finished the race with two T-shirts, two finisher's medals, and a nice, plump and purple blood blister on my right index toe to show for it, we headed over to Seabright Brewing for some post-race recovery. It's located in a blocky, two-story, white retail building a short drive from the Beach Boardwalk. Plenty of other finishers had the same idea, and the place was pretty full of people in a celebratory mood, but at the same time too tired to get very boisterous. Linda and I were not eager to go back outside in the rain, or even get up once we sat down, so took our time checking out what Seabright had to offer.

Stouts are one of my favorite styles, so decided to start off with their Oatmeal Stout, while Linda, ever the hop-head, went for their Blur IPA. As stouts go, the Oatmeal Stout was rather smooth and light for the style, with a light milk chocolately-ness to the roasted malt. A stout is not the sort of beer one would usually call refreshing, but after a day at the beach, this might be something I'd reach for. Their Blur IPA was the classic West Coast IPA, with a whisper of light malt and lots of citrussy, grapefruity hop flavor, and give them credit for easing off the hop throttle a bit and delivering something flavorful, not assaulting.

The Salmon Fish and Chips I ordered was a nice Asian riff on the classic pub dish, complete with a couple spicy dipping sauces, and enjoyed a Loose Lucy Scotch Ale with it. If memory serves me right, no less than nine malts were used in this one, which gave it really easy sipping, bourbon and toffee character to it. Good that one of those malts was a peat malt, which added a nice little woodsy note to the whole thing. Linda had an enormous tuna melt with Uncommon Brewer's Serendipity Sour Ale, which has a great sour, lemony tang to go with a tingly carbonation. Come to think of it, a tuna melt with Belgian Sour Ale, or salmon and Scotch Ale are hardly ideal beer and food pairings, but when you're just tired and want to get out of the rain, good beer with anything is perfect. 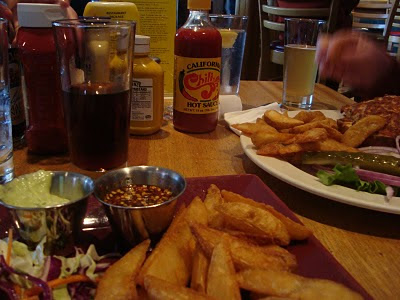