I remember watching a documentary on Alice Cooper, who described the time early in his career when he was discovered by legendary music producer Bob Ezrin. Alice credited Ezrin for teaching him how to sing, for teaching his drummer how to play the drums, teaching his guitarist how to play the guitar, showing Alice how to write songs, and basically guiding him on how to do everything a successful rock and roll act needed to do. I felt the same way when I recently homebrewed with my friend Eric, a much more experienced homebrewer, as we brewed up our Biscuits and Honey Amber Ale.

Eric taught me about making a yeast starter, about sparging, using a wort chiller, and a bunch of other techniques that any good homebrewer ought to know, and I wrote about our collaborative beer for that last Beer Blogging Session. Maybe fifty years from now, will they etch on my tombstone the solemn words "He was best known as the Alice Cooper of homebrewing". A guy can dream, can't he?

Without further ado, the recipe.

5 days later after the primary fermentation died down

1 lb of Organic Buckwheat Honey mixed with 6 cups of water, heated for 1 hour at 180F was added to the primary fermentor.

10 days later, transferred to a secondary fermenter for an additional two weeks.

I should mention that one of us accidentally put two ounces of Galena hops into the boil instead of just one ounce. I won't mention any names, but his initials were Derrick Peterman. Thankfully, Eric didn't give me too much of a hard time after we discovered the error about five minutes into the boil. We fished out what probably amounted to a little less than an ounce of Galena hops over the next 30 minutes.

Tasting Notes
I really liked the progression of flavors. It starts out with a sturdy, biscuit malt character, and then some of the honey notes kick in. There's also a hard to define light bitter note that has a tea-like character, and just a very slight sweetness from the honey. At the end, there's a strong, yet smooth hop bitterness. I'm no expert on these things, but I didn't pick up any off-notes or problems with the brew, unlike some of my earlier homebrewing efforts, and I'm really encouraged by our results.

Next time we brew, I'm bringing some live bats. 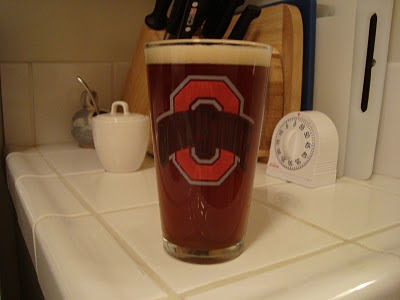