Surprise Trip to Harsh Running and Brewing Conditions in Utah 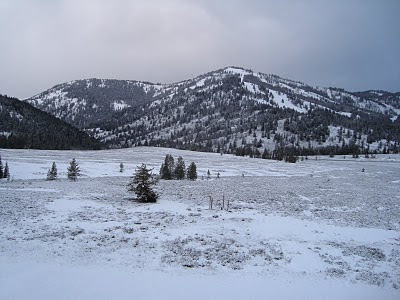 Sometimes out of the blue, life takes you places you never expected. One day in late April, my boss calls me into his office, shuts the door, and tells me our company is about to be acquired. Two weeks later, I'm meeting with the sales force and management of my new company in a small, isolated lodge 30 miles east of Logan, UT just south of the Idaho border. At 6,500 feet above sea level, a light snow fell steadily, even though it was early May. The only chance to run with all the planned activities was during the early mornings in snowy, windy 30 degree weather. I didn't pack any sweats or running tights, gloves, or a hat, but that didn't stop me from getting in a couple short morning runs. Running in just shorts and long sleeve T-shirt in these conditions creates a certain refreshing intimacy with the surrounding environment, as the cool air rushed by my legs and face, with the soft crunch and the strain of the changing terrain in each step.

Running success is about overcoming barriers, so bad weather days give you the opportunity to train the mind to deal with discomfort and anything the weather might throw at you. Now I didn't run around in these conditions to the verge of frostbite, with the runs lasting only about 20 minutes. But now I'm better prepared for whatever cold and windy conditions the San Francisco Bay weather throw at me, and running around for 20 minutes is better than nothing.

The Utah climate is not very kind to the craft brewing industry either. When a sizable fraction of the local population will not drink your product, or is even downright hostile towards it, a local brewery better brew something pretty good if they want to stay in business. But since 1986 Wasatch Pub and Brewery has survived, even thrived in such difficult business conditions. And since Wasatch founder and owner Greg Schirf spearheaded legislation in 1988 to make brew pubs legal in Utah, at least 12 brewpubs have followed Schirf's trail and found success is these less than ideal business conditions. I was fortunate to discover Wasatch Brewing's fine beers during my stay in Utah, which my new employers graciously provided.

I'm quite relieved to discover my new bosses appreciate good beer. Especially since they checked up on me and discovered during a Google search that I write this blog. Here's a brief run down of the fine beers they shared with me.

Apricot Hefeweizen
The Hefeweizen style is known for plenty of fruity, banana-like esters and light aromatic spiciness. I wasn't getting much of that here. This was more like a fizzy wheat beer with a light apricot tartness that harmonized well with the underlying wheat. The end result was pretty refreshing even if it didn't quite meet my intial expectations, and I appreciated the restraint of the apricot.

Provo Girl Pilsner
This is actually brewed by Squatter's Brewpub, which partnered with Wasatch a few years ago. The light brew has a nice, earthy hop finish to it, and plenty of tingly carbonation.

Full Suspension Pale Ale
Another selection from Squatters, and if you like Cascade hops which I do, you're really going to like this one. Plenty of citrussy Cascade hop aroma and a bitterness, well balanced by a straightforward, bready malt. Not a very complex brew, as it was mostly a showcase of Cascade hops, and that works pretty well for me.

Polygamy Porter
Of course, as a red-blooded heterosexual male, polygamy suggests all sorts of intriguing carnal possibilities. But on further reflection, polygamy seems a bit overrated. Even if you really love the one you're with, would you really be happier with one, two, three or more of the same person around all the time? Now you know what I'm talking about.

As for beer, I picked out plenty of rich coffee notes in all the roasted malt goodness. It's a very drinkable porter with the fizzy carbonation being the only slightly off note. Better to have a few extra beers than a few extra wives if you ask me. 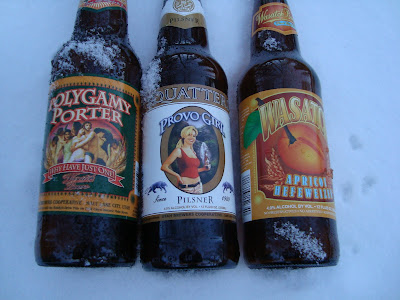