This month's Session, Summer Beers is hosted by Peter Estaniel over at the BetterBeerBlog.

This month's Session, Summer Beers, is a great topic, since I have little interest in jumping on another bandwagon of beer geeks raving about the latest hyper-malty, barrel aged, hop bomb where the brewer actually did throw in the kitchen sink. The lighter beer styles we normally associate with summer require much skill and talent to brew, with no places to hide off flavors. Having had so many great summer beers, it's hard to pick a favorite. For me, a "favorite beer" is largely determined in the context of which it is consumed, as well as how and where the beer is produced. That's why my favorite beer this summer is from a brewer you never heard of, and I haven't even swallowed a drop of it yet. I'll get to my favorite summer beer at the end of this post, so allow me to celebrate a number of my summer favorites before then.

Favorite Summer Beer with Lime In It
Summer beers with lime in them are typically some hideous product from big industrial breweries that are barely recognizable as beer. That wasn't the case with Coronado Brewing's Lime Wit that I enjoyed this summer at my favorite beer bar in San Diego, Downtown Johnny Brown's. Sour lime dominates the slight yeasty flavors of this Wit beer, and there's a bitter lime peel finish to it. I've enjoyed other wits more than this one, but this unique San Diego-inspired beer deserves a mention.

Favorite Summer Beer to Drink After a Summer Run
It's only natural to expect the writer of blog called Bay Area Beer Runner to cite a favorite summer beer for drinking after a run. The problem is that during summer, my runs are exclusively in the early morning when the air is coolest, which is when many runners train. Knocking down a couple pints of beer after a morning run before heading off to work is a pretty risky career strategy. Not being a fan of those foul-tasting, over priced sports drinks, I just have water after a run.

Favorite Summer Beer to Witness Another Disappointing Chicago Cubs Baseball Season
I've been a Cub fan for thirty years, and each year, the Cubs find a new and creative way to build up expectations and then deflate them over the course of a baseball season. The other constant over that time is that Heileman's Old Style has been strongly associated with Cubs' baseball. If you've ever had this light lager, you'll begin to understand why Cub fans have such a high tolerance for pain and misery.

Favorite Summer Beer to Get Ready for The Ohio State University's Football Season
Keeping on the topic of sports, as a graduate of The Ohio State University, I've spent many a summer chatting away with other Buckeye fans in anticipation of the upcoming fall football season. And there's no better beer for this than Buckeye Beer from Maumee Bay Brewing in Toledo, OH. It's a beer with a long history that ceased production in 1972, only to be recently revived with a retro-marketing campaign. But it's no weak, gimmicky pilsner. This refreshing beer's malt is a little biscuit-like, and the hops crisp and grassy. It's also good in winter time for Buckeye fans recovering from a crushing Bowl game defeat.

Favorite Summer Beer to Experience a 60's Flashback
Last month, my girlfriend and I checked out Magnolia Pub and Brewery, merely a block away from the storied Haight-Ashbury intersection in San Francisco. We were both really impressed with their Kalifornia Kolsch. It's a hazy yellow brew, with a strong peppery flavor and we also noted some notes of lemon. Despite the strong flavors, there was a feathery lightness to it. It's so good, it actually caused me to admit The Grateful Dead had some redeeming qualities.

Favorite Summer Beer That I Couldn't Come Up with a Category For, But Wanted to Mention Anyway
I've long been a fan of Victory Brewing in Downing, PA, but it's hard to find their beers in the Bay Area. In San Diego last month, I found Victory Brewing's Prima Pils on tap. Like any good pilsner, it’s got a crisp grassy hops finish, but I also picked up some savory herbal character with all that hoppy goodness, giving it a rare complexity and dimension for a pilsner.

Before revealing my Favorite Beer of the Summer, I should start by saying why I think running is a great activity and for those of a competitive nature, a great sport. All you need is a good pair of shoes, lace 'em up, and go out the front door. The equipment is very affordable, and the best places to run are public areas available to all. There are road races held all over the United States where for a reasonable fee, anyone can enter to run with the best runners in the nation, or even the world. The stop watch does not discriminate on the basis of race, income, sex, religion, origin, good looks, or anything else. 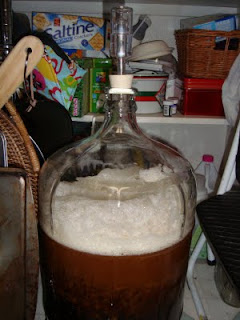 The same egalitarian qualities that makes running great, makes beer great. It is most commonly consumed in informal public gatherings. Even the finest beers are affordable to most. And with a small investment, anyone can start brewing beer for themselves. That now includes me, as I've home brewed up my first batch of beer of what I expect to be the first of many home brews. Perhaps someday, my brewing skills will progress to the point where I'll compete in home brewing competitions, but for now, I'll settle for brewing up something that just tastes good.

I didn't muck around in the kitchen that badly brewing it up, so fingers crossed, it will taste OK. Since it was bottled a week ago and needs two weeks of bottle conditioning, I haven't even tasted the final product. But sampling the brew as it went into the bottles didn't reveal any obvious off-flavors, and it tasted like a decent beer to me. Having only the slightest idea of how to brew beer, but with plans to keep at it, I call it Blind Ambition Amber Ale, and it's my favorite summer beer.
at September 03, 2009

Email ThisBlogThis!Share to TwitterShare to FacebookShare to Pinterest
Labels: homebrewing, The Session