It's About Time I Write About El Toro 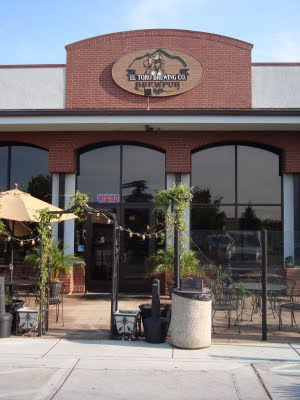 The brewpub opened in 2006, but Geno and Cindy Acevedo of El Toro have been brewing since 1994. They do great standard session beers, and they do great beers with that have their own unique twist on a style, that few other breweries attempt. With about 20 taps, there's something for everyone. And the food is pretty good, too. Frankly, if this place was in San Francisco, everyone would be talking about it. But it's not, and too few people have heard about it, or have even been there. Luckily, I live in the South Bay, and El Toro is only a 20 minute drive from where Linda and I live. We were fortunate to spend dinner over the weekend, and enjoy some of their beers. Here's what we thought of the beers we had.

El Conejo Red IPA
There's a little sweetness in this red IPA, and plenty of roasted malt. Centennial and Amarillo hops give it a tropical fruit, pineapple character to it. The bitterness of the roasted malt coupled with a healthy dose of hops gives this brew a very strong bitterness and astringency. Unique and different, it's just a little too much bitterness for my taste, but Linda, the wine loving closet hop-head can't get enough of this.

El Toro Blackraspberry Ale
Fruit beers are often dismissively labelled a "chick beers" by card carrying beer geeks. I'm afraid I was not secure enough in my manhood to order this, so left it up to Linda to get this one. We both like the slight tartness and the clear, slightly earth black raspberry fruit notes, without the cloying sweetness that ruins many a fruit beer in my opinion. El Toro also has Peach and Raspberry Ales on tap, and perhaps next time, I'll have the guts to order one of these brews.

El Toro Negro Oatmeal Stout
Plenty of roasty, coffee-like malt goodness you look for in a stout, but we found it light and smooth, with little or no sweetness, despite the rich flavors. We also picked up some bitter chocolate in there. Very easy drinking and enjoyable.

Can't wait 'til I get back there. 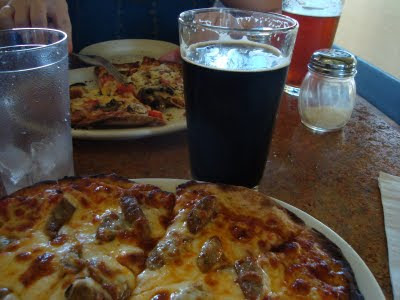