Lots of good beers, and one lame autism joke: 6th Annual Brews on the Bay 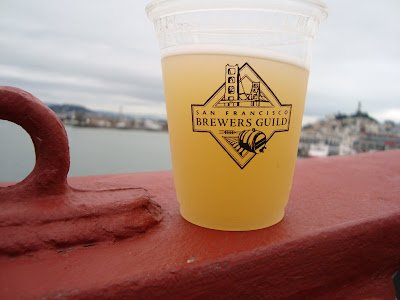 The 6th Annual Brews on the Bay was held on the S.S. Jeremiah O'Brien, a World World II era merchant ship docked on Pier 45 at San Francisco's Fisherman's Wharf. The seven members of the San Francisco Brewers Guild were spaced around the deck of the restored ship, pouring their beers. I suppose I could write about the festive atmosphere aboard the ship, or the U2 cover band that playing. Or I could just start writing about the beer. But instead, I'm going to write about a subject one of the pourers at the festival was joking about. It's something many people aren't familiar with, and often people aren't comfortable about. The subject is autism.

Linda and I were at Thirsty Bear, and one of the pourers was loudly apologizing for having Asperger's Syndrome, a high functioning form of autism. My eight year old son Brandon has autism, so I turned to him and told him, "It's OK, my son has autism. Having Asperger's is OK". He looked stunned, and I suddenly realized at that moment he probably didn't have Asperger's, and his affliction probably involved sampling way too much of Thirsty Bear's product. I've said enough stupid stuff stone cold sober to cut the guy some slack, so shrugged off the lame joke, and Linda and I walked away with our Thirsty Bear brews.

Five minutes later, Linda and I are somewhere inside the ship, sipping our beers and looking at various rooms restored to their World War II era appearance, when a woman from Thirsty Bear came up to us and said "I've been looking all over the ship for you. I want to apologize for that guy who told you he has Asperger's Syndrome." Now it was my turn to be surprised. We told her not to worry, that we still liked Thirsty Bear, and it wasn't a problem, and thanked her for her concern. My son Brandon was diagnosed 5 1/2 years ago, and I've more or less come to terms with his condition, so I pretty much shrugged this off.

Most people rarely if ever deal with autism, and often when confronted with it, are confused and uncomfortable as to what to do. Brandon's autistic behaviors are erratic, confusing, nonsensical, and yes, at times, funny. So I can actually understand why some guy might think it's pretty funny to say "I have Aspergers". But I find that 99.9% of the people who meet Brandon for the first time deal are confronted with this awkward situation, respond with a great deal of patience and understanding, which is huge for Brandon overcoming his behaviors. Who ever tracked us down inside the ship from Thirsty Bear to apologize, thanks so much for going the extra mile. It's people like you who give Brandon a fighting chance.

OK, let's talk about beer. Here's what Linda and I liked that evening, starting with a couple from our friends at Thirsty Bear. 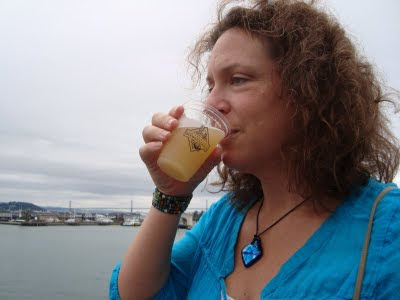 Thirst Bear Valencia Wheat
We both enjoyed this clear, refreshing wheat beer, brewed with a little coriander and orange peel in the Witbier style. It poured a clear yellow, so perhaps it was filtered. The noticeable orange flavor gives this one a nice twist.

Thirsty Bear Irish Coffee
I didn't note what style this was, but appeared to be a barrel aged, Imperial Stout with lot of bitter coffee goodness, and we noticed some whisky in the background. Seemed a little light on the malt for the Imperial Stout style, which I found to be a good thing that evening, as it made for an easy drinking barrel aged Imperial Stout. I don't know if you're into something like that, but it worked for us.

Speakeasy Mickey Finn Imperial Red Ale
I've found many excellent brewers turn this style into something really aggressive, with a double punch of bitter roasted malt and heavy hops, and the result is often barely drinkable. That's not the case here, as this Imperial Red from Speakeasy has a flavorful caramel malt, with some raisin like character, and a mellow resiny aftertaste.

Magnolia Dark Star Mild
Magnolia seems to focus a lot on their malt, and it seems to be reflected in their beers, which have an artisan bread character to them. Mild is almost a forgotten style in the United States, but this drinkable session beer with lots of roasty malt and a slightly grainy character made me wonder why.

San Francisco Brewing Hugh Hefnerweizen
When it comes to beer, variety is the spice of life. I cannot, and will not simply settle down with one beer. But this Hefeweizen from San Francisco Brewing is luscious, yet slightly muscular, and has a slightly sweet, alluring aroma. It tastes a little rich and fruity with seductive banana notes. If forced to be faithful to one beer, I just might shack up with this one.

Maybe someday, Brandon and I can talk about our favorite beers. 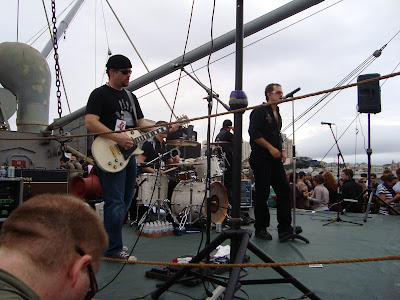