When Gordon Biersch first released Dunkles 25 years ago, it was as unique as it is now, but for different reasons.  Back then, Dunkles was a rich, roasty unfiltered black lager amidst a sea of pale, watery yellow ones. Despite 25 years of extraordinary brewing progress in the United States, Dunkles remains unique both here and in its homeland Germany.  "None of the larger German breweries make anything like Dunkles today," stated Dan Gordon, the day I visited him at his brewery in San Jose's Japantown to talk about Gordon Biersch's latest limited release of Dunkles.  "The caramelized malts are too expensive.  A lot of breweries use food coloring."

While it's not unusual to see dark lagers from America's craft breweries, they tend to source malts that aren't evenly roasted.  As Gordon explained, "Take a look at the caramelized malt you get in the US and the grains are different colors. Some are dark, others are light.  It doesn't average out to what a caramelized malt should be." Gordon gets his highly uniform roasted malt from Germany from a former classmate of his at the Technical University of Munich's brewing program. Gordon spent five years in the brewing program, becoming its first American graduate in 40 years before teaming with restaurateur Dean Biersch to form Gordon-Biersch in 1988.

Dunkles is brewed using a double decoction technique, a time intensive process few American breweries use. Decoction refers to a process where a portion of the grain mash is removed and placed into boiling water before being added back to the original mash to raise the overall temperature of the mash.  As one might expect, in a double decoction, this process is done twice in the mash phase.  It's a technique still practiced by many German breweries, but rarely done in the United States.  Deeper malt flavors are created during the boiling portions of the decoction since the malt is subjected to higher temperatures.

Gordon recalls the time back when Dunkles was the first beer brewed and served at the Palo Alto brewpub back in 1988.  Legendary beer writer Michael Jackson happened to be passing through and after hearing what Gordon was up too, decided to stop by the brewpub and see for himself.  Jackson asked for a sample. Gordon explained that it needed another couple weeks in the fermenting tank before it would be ready but let Jackson have a taste anyway.  Gordon remembers seeing Jackson's face when he took a little swig, smiled, turned to him and said, "If it's this good now imagine what it will be like in a few weeks". 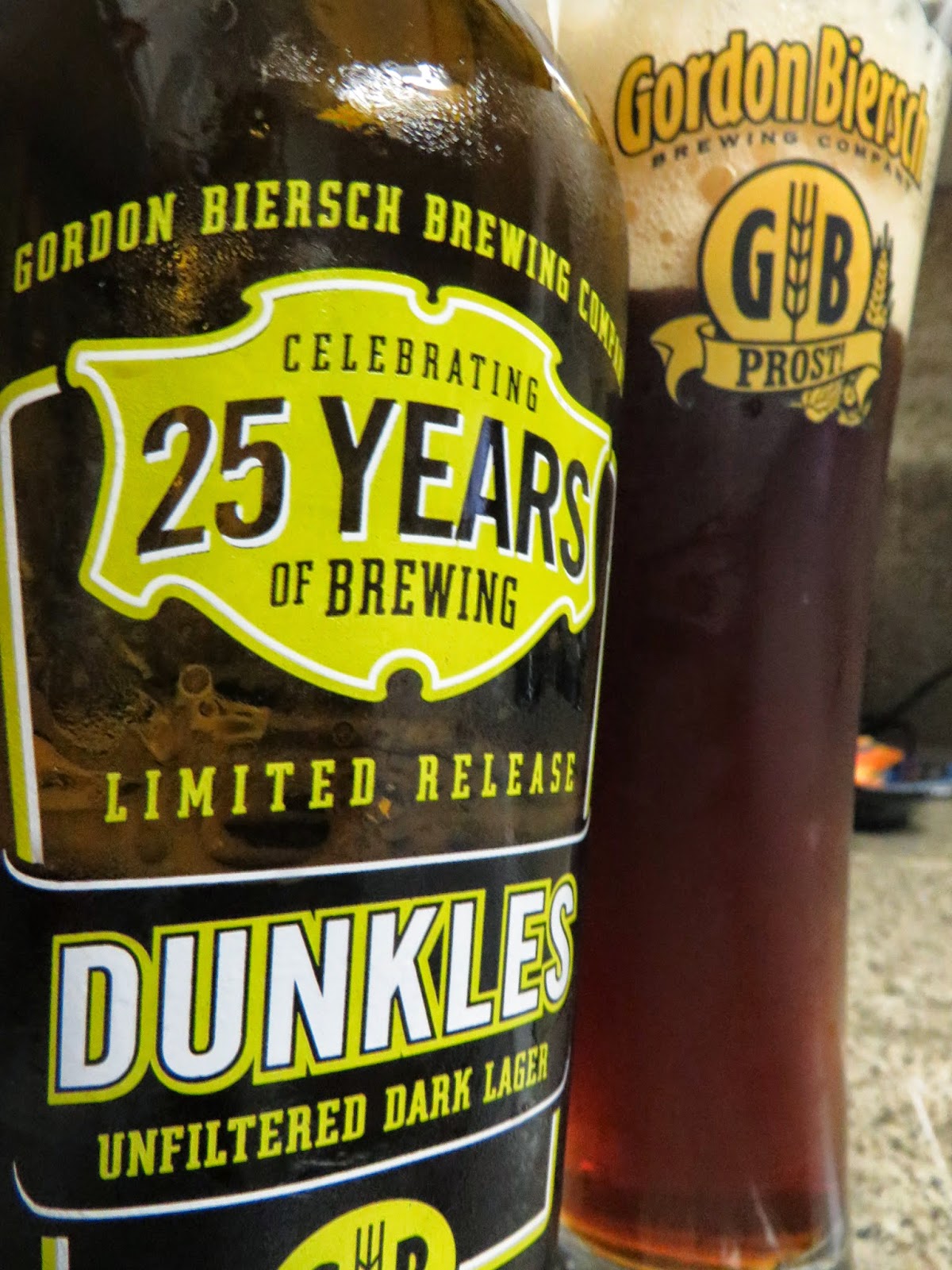 When Dunkles was finally ready, it turned out to be a big hit, much to Gordon's pleasant surprise.  "We thought we were doing something that was going over the edge, but a lot of people liked it.  We blew through it."  Back in 1988, dark beer to most people was either a completely foreign concept or meant something like Michelob Dark.

I probably don't have the palate to fully appreciate Dunkles, but can notice the difference in the taste from both the ingredients and the careful brewing process.  The toasty, caramel flavors are cleaner with a lot of depth and complexity.  There are other dark lagers out there, but often one picks up slightly harsh or muddled flavors within. Dunkles is not only a part of our region's brewing history, it's a study of how extra care in both the ingredients and the way a beer is brewed can make subtle, but significant differences.

I wasn't around 25 years ago when Gordon Biersch started but can imagine that back then, beers brewed with traditional German methods were pretty novel and eclectic.  Today in this era of extreme IPA's, wine barrel aging  and countless beers brewed with ingredients like pluots and hibiscus, Gordon Biersch comes across as a bit stodgy.   But if you've been doing things right for decades, stodginess is a good thing.  Dunkles is the proof.