Getting Back to Wharf to Wharf 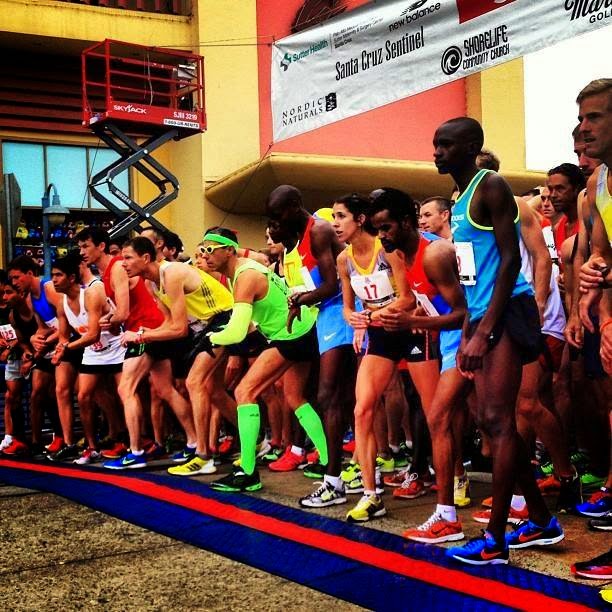 It's been five long years since I've run the Wharf to Wharf race in Santa Cruz. This six mile race of 15,000 people winding through Santa Cruz serenaded by something like 20 bands along the way used to be one of my big "circle the calendar" races a bunch of my hard core training friends and I used to shoot for.  Unfortunately, all that hard training caused injuries to start piling up by the time I got to the starting line in both the 2008 and 2009 races, turning them into pretty big disappointments.

I can't remember much about the 2009 race.  My only real memory of it is hobbling through mile 3, feeling pretty fried with half of the race yet to go. There on the side of the road was this punk band, the heavily tattooed lead singer screaming a bunch of completely unintelligible lyrics into the microphone, finally punctuating it with a simple "Fuck it".  That pretty much summed up the race as far as I was concerned.

That was five years ago.  It was time to go back.  I've spent a few years correcting a hip and leg imbalance that was causing a lot of those injuries and modifying my training to get to the line healthy.  I still train with basically the same crew, but we've mellowed out a little over the years, getting slower as we've all gotten older.  Summer these days is a time to rest from my spring half-marathon before gearing up for the fall.  So while Wharf to Wharf still gets the adrenaline flowing, it's not what it used to be.

This year, I just wanted to put in a good effort, enjoy the bands along the course, and savor a post race beer or two.  The plan was to go out at 6:00 per mile pace and simply try to hold that.  I did a good job of hitting this goal pace and the first mile seemed pretty easy.  So did the second mile, which has a good sized hill in it, so that was pretty encouraging.  I get to the third mile and well, the six minute pace started to get difficult.  Then I started really laboring and over the last three miles were pretty I fell 10-20 seconds off six minute mile pace.  While it was encouraging that a six minute pace seemed pretty easy early on, I was equally surprised how quickly things felt apart.  It probably means I need to work on tempo runs to increase my lactate threshold pace as those first three miles filled my legs with muscle mucking lactic acid.

My official finish was 37:03, 6:10/mile pace which was good for 175th overall and 25th in the men's 40-49 age group which is still a pretty good showing if you ask me.  In a couple weeks I'll take on the Los Gatos Dammit Run before turning my attention the Big Sur Monterey Bay Half-Marathon in November.  I'm shooting for 1:22 at the Monterey Half-Marathon which is around 6:15 per mile pace, so this off-season race shows I have that in me.  Now it's time to put in the hard work to make that a reality.

Email ThisBlogThis!Share to TwitterShare to FacebookShare to Pinterest
Labels: running, Wharf to Wharf