There's a certain irony with vacations in that you learn a lot about the place you live by going someplace else.   This past week on a family vacation visiting relatives in Fort Myers, I discovered the beaches of Florida's Gulf Coast make Northern California beaches seem like hostile environments.

On the Gulf Coast, warm, calm waves gently rock you as you float upon the buoyant waters of the shallow beaches.   It's just the relaxing, carefree experience one hopes to escape to while on vacation. Northern California beaches get a lot of glory, but are full of frigid waters, unpredictable waves and dangerous rip currents.   Unless you have a wet-suit and other specialized gear and are one of the few individuals adapt at things like surfing, open water swimming, or para sailing, you're basically left standing at the shore in ankle deep water gazing off watching other have a good time taming the fury of the ocean.

I also thank my lucky stars I don't run in Fort Myers.  Even at 7:00 in the morning, the air is hot and humid, heavily filling my lungs with each gasping inhalation. I might as well be running with a sock pulled over my head. Flat courses are nice, but I found myself longing for even the slightest little hill to break the total flatness monotony.  Most morning runs are a refreshing wake up to prepare me for the rest of the day but during this vacation, morning runs became a chore akin to cleaning the toilet.

Of course, I wanted to check out what the beer was like around there. Exploring local beer scenes and family vacations do not mix well, but one afternoon, my brother-in-law Jay and I sneaked away for an hour to grab a brew at Fort Myer's Brewing Company. On the way there, Jay conceded, "I've never been there before, I don't know if it's legit."   His cell phone directed us to a nondescript, modern looking industrial park and Jay's starts apologizing for leading me astray, thinking there's no way one can get a beer at an industrial park.  I see a food truck and a few cars concentrated in the otherwise empty parking lot off in the distance and sense we are on the right track.   Sure enough, as we continue forward the brewery and tap room emerges on our right.  America's brewing revolution is redefining places where people gather together as many local breweries and their tap rooms are transforming their industrial park environs into public meeting places.  In San Jose, Hermitage Brewing, Clandestine Brewing, and Strike Brewing are transforming the industrial section of south of downtown into a beer destination and its encouraging to see this in happening in Fort Myers, albeit on a smaller scale.

But enough about the geographical implications of the craft brewing revolution, you probably want to know what the beer at Fort Myers Brewing is like.  Pretty damn good if you ask me.  Too good, in fact, to be served in the plastic cups they use in the tap room.  Jay and I enjoyed their fine City of Palms Pale Ale, an interesting and novel balanced brew that surprisingly grabbed my attention.  There's a little toastiness, a little citrus fruitiness, and a nice subdued piney finish that's all comes together nicely in this Pale Ale.  The 20 something beer frau running the tap room allowed me to sample a few other of their brews, gratis.  They had a Imperial Black IPA called Incognito that won some award, and given its unusually sophisticated mix of malt, hops and boozyness, I can see why.  Their Tamiami Tan was an intriguingly complex Brown Ale.    I can't really give a beer justice reviewing it from a small, one ounce sip from a plastic cup, but let's just say plenty of their beers merited a further look. Unfortunately, on a family vacation, beer exploration is low on the agenda and I'll have to delve deeper into their beers another day. 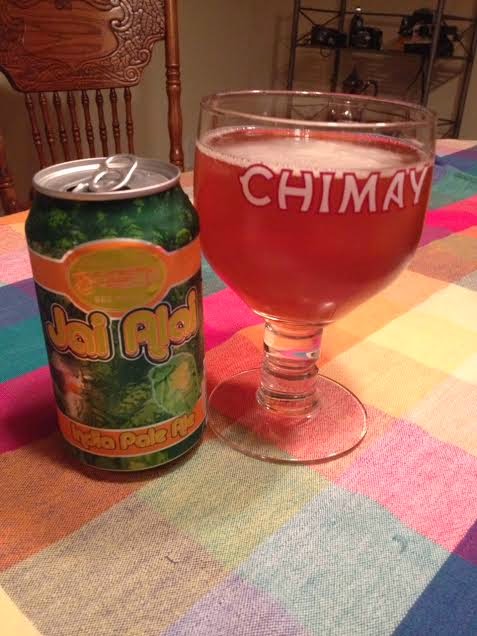 Fort Myers a two hours drive south of Tampa, so I wanted to check out some of the brews from much heralded Cigar City Brewing.   Rather than hunt around for a high end bottle shop for their highly prized special releases, I picked up a few selections at a Publix supermarket, which is basically Florida's answer to Safeway.  Lots of people raved about Cigar City's Jai Alai IPA  so I made sure to secure a six pack of that first.  I can see myself enjoying 2-3 Jai Alai's during an afternoon at the beach, with its tropical mango and pineapple flavors, light sweetness and slight resiny finish making it an ideal thirst quenching IPA.  A good IPA to be sure, but I found it didn't quite live up to the considerable hype.  For my money, the better choices in Cigar City's regular line up are their Florida Cracker White Ale, with its great interplay between the tangy wheat malt and heavy use of coriander spice, and their Maduro Brown Ale in all its silky complexity.

Another day when heavy rains completely scuttled our beach plans, Jay took my son and I to World of Beer.  World of Beer is one of those chain restaurants boasting of numerous taps handles, sort of like the Yardhouse in the Western United States.  While my son sucked down a craft Cherry Cola, I slowly sipped through another City of Palms Pale Ale while will all chatted away watching the blowing rain ravage the World of Beer patio out the window.  Our day at the beach was ruined, but we didn't care.  Relaxed, comfortable moments with family, out of range of the storms from afar are why we take vacations.