The Session #100: Why has the Gose re-emerged in United States?

One of the more unexpected developments in America's brewing landscape is the re-emergence of the nearly discontinued Gose style. With its odd sour-salty balance, this obscure German style seems like quaint historical brewing artifact rather than a modern commercial hit.  Yet a few breweries in the United States have found success reviving this style, two of the largest being Northern California's Anderson Valley Brewing and Kansas City's Boulevard Brewing. So when Reuben Gray asked us to write about resurrecting lost beer styles for this month's Session, it got me asking:  Why has the Gose style come back in the United States?


While I'm afraid I can't give a comprehensive answer to the question, I did talk with Anderson Valley Brewing and Boulevard brewing about the origins of their Gose beer and made some interesting discoveries along the way.

I first spoke with Anderson Valley Brewmaster Fal Allen about his brewery's Gose and learned the beer was largely a product of serendipity.  "We really didn't set out to brew this beer in the first place", described Fal Allen of its origins.  "At the time, we were experimenting with a sour mash and someone suggested we try brewing a Gose."  Everyone around the brewery liked it, and after tweaking the recipe four or five times, they released it to much success in 2014.  Anderson Valley has since followed-up their regular Gose with a Blood Orange Gose. Anderson Valley has another Gose with a different spice or fruit addition in the works to be released within the next 12 months which Fal Allen was not ready to talk about it yet. 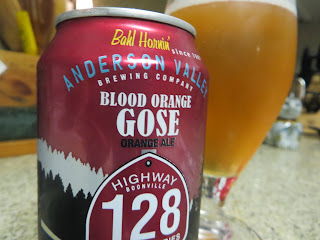 Then I gave Jeremy Danner over at Boulevard Brewing a call, Jeremy being one of Boulevard's Ambassador Brewers.  He told me Boulevard's Hibiscus Gose started as an employee Christmas present at the end of 2012.  "We usually brew a beer for the employee Christmas present that normally does not have much commercial potential, but something we want to drink," explained Jeremy of this brewery tradition.  Not only was Hibiscus Gose a hit with Boulevard's employees, they took a couple kegs to the brewery tap room and to local beer festivals and discovered it was a big hit there, too.  "We knew we liked it, but it was cool that the public liked it too," exclaimed Jeremy. Boulevard released Hibiscus Gose in 2014 and it's been one of their more successful new releases.

It's only a couple data points, but notice a couple trends.  Both breweries were engaging in an esoteric brewing experiments that seemingly only a brewing wonk could love, yet discovered the general public also enjoyed it.  The other thing to note is that both beers rely on novel, non-traditional ingredients to stand out.  In Boulevard's case, they added Hibiscus to make the beer pink.  Sure, the Hibiscus gives the beer a nice light citrus and cherry character but they wanted to brew a pink beer. Cranberry was considered and discarded because Boulevard had concerns about the sugar content and how it might re-ferment in the bottle.  While Anderson Valley brews a straight Gose, they've gotten a lot of mileage out of their non-traditional Blood Orange variant.  While the Blood Orange adds great flavors and aromas to the beer, Brewmaster Fal Allen wasn't very bashful when he exclaimed "It gives the beer a cool name!"

My hunch is that we're going to see a lot more long dormant historical beer styles resurrected in the United States for three reasons.  The first reason is none other than most of these old styles taste pretty good in their contemporary revision.  I've sampled all three of these Gose beers as well as other resurrected styles and enjoyed every one of them. All were made by skilled brewers, which certainly helps, but there was a reason why these styles were popular at some point in history, and all these reconstructions made that seem obvious.

The second reason is because information simply travels faster than ever before. In the 19th century, it would take months for a Gose recipe to reach the United States.  In the 20th century, that time reduced to a few days.  Today with a simple mouse click, any enterprising brewer can find a historical recipe in seconds.

Lastly, let's admit that most of the 3,000+ breweries in the United States are looking to do something new and original to stand out from the rest. Only so many beers can be brewed with bull testicles  or smoked goat brains before those gimmicks get pretty stale.  So why not go into the past and find some fresh and original from a centuries old forgotten style?

As the modern brewing revolution continues to push the limits of what beer is, a fortunate by-product is further discovery of what beer was.
at June 05, 2015