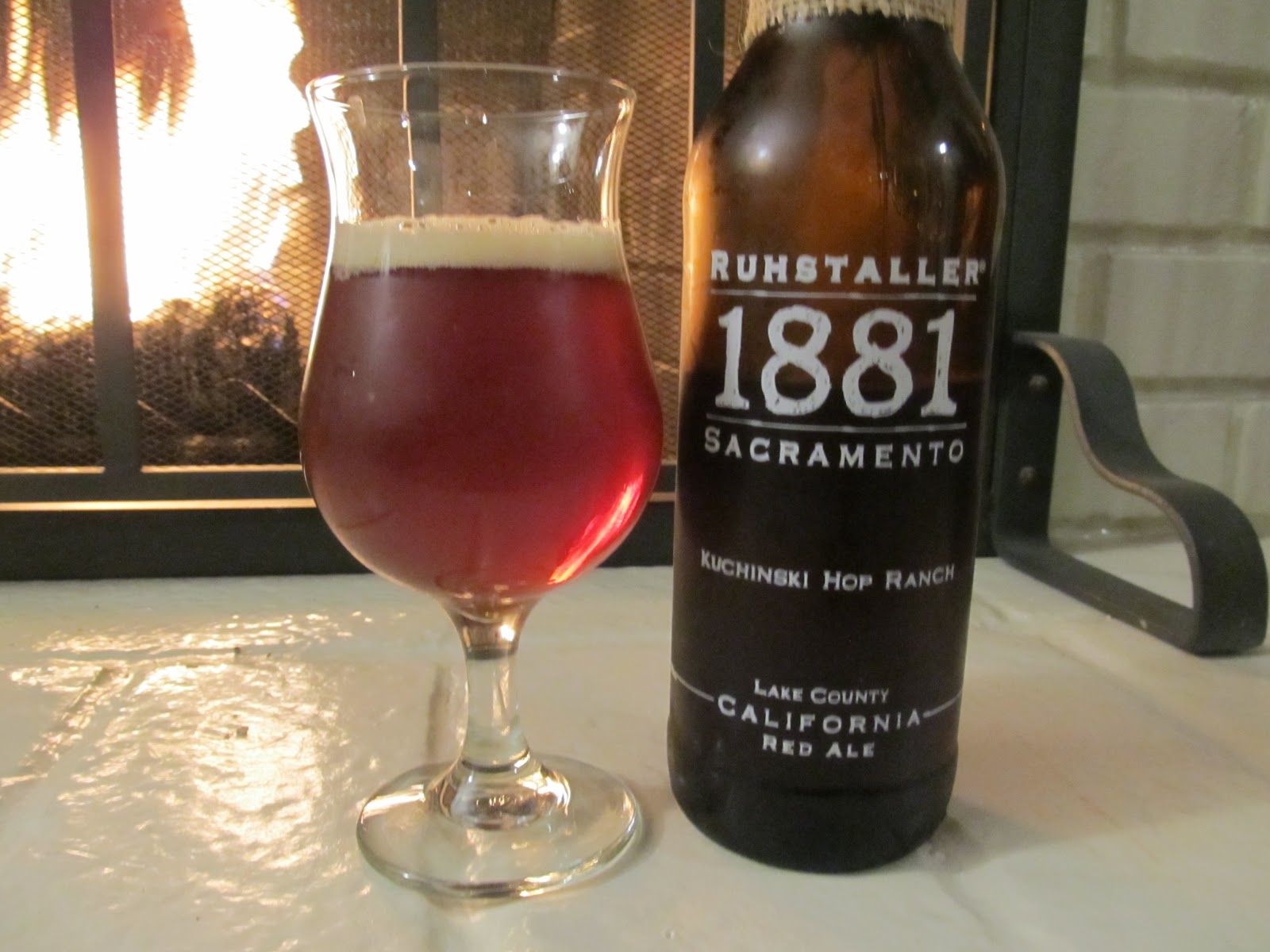 Our Beer of the Month comes from Ruhstaller, a relative newcomer to Northern California, a brewery founded 2 1/2 years ago by Jan-Erik Paino.  So who's this Ruhstaller guy?

That would be Captain Frank Ruhstaller, a Swiss immigrant who travelled across the United States and in 1885 at the age of thirty-five, opened his third brewery, the Ruhstaller Brewery in Sacramento, the largest brewery west of the Mississippi at that time.  (Which included the legendary August Busch Brewery, which was also a few miles west of the Mississippi River in St. Louis.)  Why then, did Ruhstaller travel all the way to Sacramento to build his brewery?

﻿
﻿At the time, Sacramento was surrounded by the leading hop growing region in the United States, so the brewery was located in Sacramento to be close to the local sources of high quality hops.  "Hop growing migrated to the Yakima Valley and the rest of the Pacific Northwest for economic reasons, not quality reasons", explains Paino.  "The best hops still come from California."
﻿﻿﻿﻿﻿﻿﻿﻿Which is why Paino uses hops exclusively from the Kuchinski hop farm in California's Lake County in 1881 California Red Ale.  And while,  many brewers to urge you to "buy local", Ruhstaller takes that a step further, and sources no less than 94% of their ingredients from within California, with most of that 94% within a two hour drive from Sacramento.

﻿All those ingredients come together in this well balanced Red Ale.  It does have a bit of a rustic feel, as the brew is pretty dry, with really no sweetness at all, with toasty grain and caramel notes, and finishing with a nice warm resiny hop bitterness.

Red Ales can be pretty forgettable, and this one hits the familiar Red Ale notes, but its restraint, balance and complexity  makes it unique and memorable.  It's yet another example of the continual reinvention of beer by California brewers, whether by going all out with esoteric extreme beers, or by simply brewing a familiar style with precision while reviving traditional ingredients from a by-gone era.

In collaboration with C.B. Hannegan's and Strike Brewing, the 4th Annual SF Beer Week Beer Run heads to the South Bay.  Join us to celebrate the unlikely union of beer and running in this unique SF Beer Week event to benefit Autism Speaks and 2nd Harvest Food Bank.

Where:  C.B. Hannegan's at 208 Bachman Avenue in downtown Los Gatos.

What's the course?:  We'll start at C.B. Hannegan's, head to the Los Gatos Trail, then turn north, run the trail to Vasona Park to the Vasona Park Dam and then turn around and go back to C.B. Hannegan's.  That's 5 miles total, but if you want to run a little less (or more!) that's OK.   In the spirit of the beer run, finishing times or places will not be kept.  No entry fee either!

About the run:  It's a run, not a race!  Please obey traffic signs, yield right of way to vehicles and peacefully co-exist with other runners, bikers and walkers on the course.  We may employ a wave start if necessary for crowd control.

What happens afterward:  Stick around and enjoy a Strike Beer and food at C.B. Hannegan's and meet Strike Brewmaster Drew Erlich.  They'll be a post-run raffle to support Autism Speaks and, in memory of the late beer writer Bill Brand, 2nd Harvest Food Bank.


Raffle prizes:  Both Runner's Factory of Los Gatos and Running Revolution of Campbell have pledged a $25 gift certificate for the raffle.  In addition, the  Runner's Factory will give all runners who mention the beer run a 20% discount on any purchase.  In addition, both Adventure Sports Journal and Strike Brewing are providing T-shirts and other items for the raffle.
Raffle tickets are a dollar each, six for $5 with the raffle proceeds benefitting Autism Speaks and 2nd Harvest Food Bank.  You must be present to win.

One of my go to books for beer is Randy Mosher's "Tasting Beer".  It's full of great historical information and tasting notes, and I find myself going back to it again and again for researching stories.  Turns out you can get "Tasting Beer" for less than two buck this weekend from Inkling, a new digital media start-up based in San Francisco.  From this Friday (12/14) to Sunday (12/16), it's on sale for $1.99.  You can find out more about Tasting Beer and Inkling media version of it here:


https://www.inkling.com/store/book/tasting-beer-randy-mosher-1st/
at December 13, 2012 No comments:

One thing learned during in my "research" for an article on California Seasonal Beers is that there's plenty of good ones out there, from some unlikely sources.

And yes, the big macrobreweries are getting into the act, some of their holiday beers are a lot better than this jaded beer geek expected.  One I really enjoyed was a new release from Guinness, their Generous Holiday Ale.

A press release describes this beer as:

"Inspired by Arthur’s philanthropic legacy and devotion to generous, full-flavored beers, Guinness Generous Ale is special edition holiday beer that was developed in a traditional winter ale style, but with more body and the distinct roast for which Guinness Draught is known."

I found it to have a lot of light roasty malt flavors, with a little vanilla, and a fruity character (plums?).  Each sip ends with a noticeable piney hop presence.  Not something I would have expected from the beer, and it works.  It's "wintery" all right, but has it's own unique character.  Definitely worth checking out.

(Yes, Guinness did provide a sample for the purposes of this review. I'm glad they did.)

In the wake of Anchor Brewing's 2012 Christmas Ale, they've put together an interesting video telling the story of label artist Jim Stitt. Jim has had a hand in nearly every Anchor label since the 1970's and hand draws a new tree each year for the Anchor Christmas Ale Label. Jim Stitt, Fritz Maytag, and author/historian Dave Burkhart collectively tell the story of a huge part of Anchor's history in this  video I enjoyed watching that you can find here:

The Session #70: Don't Believe the Backlash, Either

For this month's Session, Mr. David Bascombe asks everyone to discuss beers surrounded by hype.

Which has inevitably led to a backlash of anti-hype against this beer. Beer geeks now gain a supposed air of sophistication by declaring to their friends that Pliny the Younger is overrated or  "just isn't that good" and that if you really want the good stuff, it's from some brewery they'll whisper in your ear, which of course, you've never heard of.  On top of that there is the "anti-nerd" faction of beer geekdom, deriding the whole enterprise as lemming-esque, as simply no beer is worth standing in line over an hour for.

But this misses the point. The point is not whether Pliny the Younger is really this breathtakingly euphoric experience worth waiting over an hour for.  The point is that standing in line for Pliny the Younger is a shared experience with other like-minded individuals, showing a certain commitment to both "beer" and a local brewery known for brewing excellence. Of course, the pay off at the end has to be a pretty good beer or the whole journey falls flat. But it doesn't have to be one of world's greatest beer simply because it's one of the very few people clamor for it in this way.

And I'm here to tell you that while it probably isn't the worlds greatest beer, it's pretty damn good. No, I don't wait for it each year during Pliny the Younger day.  I'm not a patient man, and yes, there are nearly equally good beers I can pick up with a lot less trouble. But I'm willing to wait a week after Pliny the Younger day to sample it at the Bistro Double IPA Festival held the first Saturday of SF Beer Week. Get there early and there's hardly a line for it. And how good is it?   Let's just say among the many examples from the finest West Coast brewers pushing the limits of their skills to create hop-alchemy, Pliny the Younger clearly stands out among that crowd.

Email ThisBlogThis!Share to TwitterShare to FacebookShare to Pinterest
Labels: Pliny the Younger, The Session

If I learned one thing from the write-up on Winter Seasonal beers from California Breweries I wrote for Adventure Sports Journal, it's that a surprisingly number of them are complex and flavorful, yet quite drinkable.  I really thought it would be difficult to find a bunch of winter seasonals that weren't heavy malt bombs or high alcohol flavor explosions that are quite frankly the last thing I'd want after a trail run.  Further proof that the vibrant California brewing community cannot be easily pigeon-holed.   You can read the round-up here.
at December 04, 2012 No comments:

I Run Therefore I Am Still Nuts: Dispatches on the Strange Tribe of Runners

We runners are a strange tribe, no doubt about that.  Author Bob Schwartz captures this strangeness in an entertaining way in his new book I Run Therefore I Am Still Nuts which takes a humorous look at the peculiarities and obsessions of runners and pokes fun at their idiosyncrasies.   As someone who's been running for over 32 years, I can certainly relate when Schwartz writes, “We wear black toenails as medals of distinction, use more Vaseline in a week than quintuplets with diaper rash and chapped lips, and try to convince ourselves that a horrifically painful muscle pull that prevents us from even walking is really nothing more than a temporary cramp."

As with all good books of this genre, it garners its biggest laughs through its human insights. Of courese, it help that runners willingly, often with great joy, engage in activities that other sensible people would avoid at all costs.  And the book also succeeds in describing "fish out of water" situations, such as my favorite chapter in which the author attends his first yoga class, despite admitting he has the flexibility of concrete.

The book is the sequel to I Run Therefore I Am Nuts!, which Schwartz wrote ten years ago.  Schwartz is the author of five books and a freelance writer whose popular articles have been published in more than 40 national and international running magazines and regional magazines, including Runner’s World and Running Fitness.  He's been running for over 40 years, and maintains the website Running Laughs.


Describing his desire to explore the humorous side of his running passion, Schwartz explains, "I’ve continued to enjoy the pleasures of running and the sometimes humbling nature of it as well.  I can now share those laughs with you from topics that include what occurs when your favorite training shoe is abruptly discontinued, the inability to admit that an injury is truly a big one, the issue of competition and aging, the inherent simplicity of running, running alone versus with others, the concept of schadenfreude, running logs, runner’s high, excuses, barefoot running, and the many peculiar talents runners possess.”