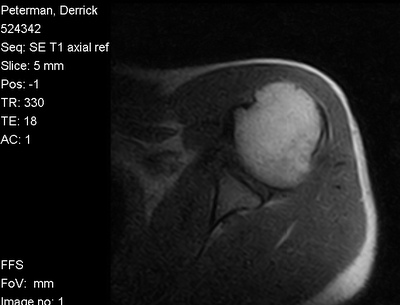 That's an MRI of my shoulder I recently dislocated.  Those trained to look at these things will notice the labrum, a lip of cartilage surround the ball and socket joint of the shoulder, is torn.  I can feel something funny in my left shoulder, and that's probably it.  So my orthopedist is basically going to stick something into my left shoulder and staple the labrum back into place.  Hopefully my arm won't be popping out of my shoulder on a regular basis.

I lost a couple weeks of running when this happened on a family trip and will probably loose another week after surgery.  But runners are always picking themselves off the mat whether it be from injury, recovering from a race, or times when life gets too overwhelming that training becomes impossible.  There is always rediscovery and optimism at these points starting from near the bottom and working your way up.

The beauty of running is that even if you're knocked out for a while, there will always be another hill to climb, a trail to explore, or a race to challenge you when you come back.  As long as the mind can will the body to run, these things will always exist. 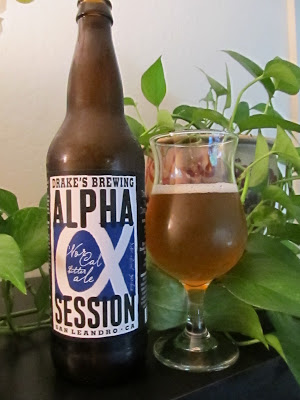 The Session #67 Announcement: How Many Breweries in 2017?

There's been much cheering and fanfare reverberating throughout the brewing community about the latest brewery numbers recently released from the Brewer's Association, who counted exactly 2,126 breweries in the United States.  To put that into context, you have to go way back to 1887 when the United States had that many breweries.  It's an astonishing 47% increase from just five years ago in 2007 when the tally was a mere 1,449, despite the United States slowly recovering from a serious recession over this period.  And according to the Brewers Association, another whopping 1,252 breweries are in the planning stages.

Where is it all going?   The growth shows no sign of stopping and the biggest problem most breweries have is that they can't brew beer fast enough.  But can the market really absorb all these new breweries?   Are we headed for a cataclysmic brewing bubble where legions of brewers, their big dreams busted, are left to contemplate selling insurance?  Or is brewing reaching a critical mass, only to explode even more intensely in a thermo-nuclear frenzy of fermentation?

Now you have a chance to weigh in on these questions.  For this month's Session, tell us how many breweries the Brewer's Association will count five years from now in 2017, and why you think it will be that number.

We greatly appreciate international perspectives on the US brewing industry and look forward to predictions on US brewery numbers from outside America's shores. Or if they prefer, they can make a similar prediction about the brewing industry in their home country.

Feel free to use complex mathematical econometric models, top secret brewing industry information, or your favorite dart board, and post your prediction on Friday, September 7th.  Share your link in a comment to this post, or send it to me in an e-mail from a link you'll find here.  I'll post the round-up a few days later.

And for incentive, if five years from now your prediction is the most accurate one, in addition to enjoying beer blogger bragging rights, I will personally buy you a beer.

Email ThisBlogThis!Share to TwitterShare to FacebookShare to Pinterest
Labels: Brewing Association, number of breweries in the United States, The Session, thermo-nuclear frenzy of fermentation

Even if you don't give a hoot about football, basketball, or baseball, it's pretty hard to avoid these sports when their seasons are in full swing.   On the other hand, it usually requires a special effort simply to watch a marathon.  Such was the case this morning when I woke up at 4 am (Pacific Time) to witness the Olympic Men's Marathon, which according to Saturday's newpaper was the starting time.  Unfortunately, the paper was wrong and when I turned on the TV expecting to see a bunch of muscularly lithe athletes nervously awaiting the starting gun, the race was nearly an hour old.  By that time US runners Ryan Hall and Abdi Abdirahman had already dropped out, and Kenya's Wilson Kipsang had taken the lead at 12 miles.  The race was noteworthy in that Ugandan Stephan Kiprotich won the first Gold medal in the marathon for his country and American Meb Keflizeghi rallied from way back in 14th at the half-way point to finish 4th.  For an Olympics with so many distance races full of suspense and drama, this one was a bit of a snoozer.

But still I watched.  Runner's are used to the special efforts usually required to watch a marathon on TV.  We often wake up early and toil in anonymity.  We've dealt with tedious discomfort, which comes in handy when the race coverage turns away from the race for yet another tired "up close and personal" segment.  And while a distance race often involves very slowly developing action where eventual winners become obvious miles from the finish line, we still give the runners our undivided attention even if hardly anyone else cares or notices, because we directly appreciate what they've going through.

Many runners have at in one point in their lives, gone through the hard work and discpline required to complete all 26.2 miles of a marathon, giving us a connection to the marathon athletes that's rarely found amoung fans of the major spectator sports.  It's what makes getting up in the dead of night worth it.

Email ThisBlogThis!Share to TwitterShare to FacebookShare to Pinterest
Labels: Running Thought for the Week, US Olympic Men's Marathon

Running Thought for the Week: How about that Men's Olympic 10,000 meters? And Women's Marathon?

I've found the general public has this perception that distance races are just about a bunch of guys running beside each independently in a time trial of sorts, all trying to break the world record, with the final places simply the result of how fast each athlete ran.  It fact, championship races like last nights Men's Olympic 10,000 meters are usually tactical battles, full of changes of pace to throw off competitors with lots of jostling for position.  Elite runners often train to handle and dish out surges in the race, and still develop the necessary finishing kick for victory.  So it's too bad the Men's 10,000 didn't get more Olympic press as this race had everything including the requisite American in the thick of things.
I could have hung with the pack for the first couple laps, dislocated shoulder and all, as slow as the opening pace was.   Eventually things speeded up, with lots of tactical running to control the pace, and plenty of pushing and shoving the whole 25 laps.  Great Britain's Mo Farrah seemed to be the target of much of this, mostly dished out by the Ethopians and Kenyans, who've respective perfected these team tactics in championships races decades ago.   Perhaps by design, the pace never intensified to whittle down many of the competitors, and I counted 10 runners within striking distance of the lead when Farrah, who was hanging around in the top five all race, jumped into the lead just before the bell lap and held on to win the Gold in front of his home country.  And wasn't it nice to see Galen Rupp up with the leaders with a lap to go, who unlike many US Olympians before him, didn't totally fall off the pace when everyone was going for it and even (gasp!) passed Ethiopian Teraku Bekele to grab the silver?     Alberto Salazar, who coached both Farrah and Rupp, earned some Olympic redemption from his disappointing marathon in the 1984 Olympics, when he had become a shell of his former invincible self.

As for the Women's Marathon, it was the tightest finish in the short history of the women's Olympic marathon, which dates back to 1984.   While not at dramatic as the men's 10,000 meters, the race started slowly, before the field started ticking off 5:30 miles before a key surge at mile 15 by Kenyan Edna Kiplagat scattered the 20 women pack.   Tiki Gelana and Mara Dibaba of  Ethopian and Kenyan's Priscah Jetpoo, Kiplagat, and Mary Keitany formed the lead pack of five, but Kiplagat soon fell off the pace.
It got interesting as Russian Tetyana Petrova Arkhipova reeled in the leaders from no-women's-land (OK, ten seconds behind) with about 6 miles to go as Dibaba fell back.   Petrova Arkhipova looked strong and with her steeplechase credentials, seemed dangerous.   But in the end, her Ethopia's Tiki Gelana proved to have too much, surging to take the Gold with less than a mile to, beating Priscah Jeptoo of Kenya by just five seconds in Olympic Record time.  Petrova Arkhipova proved to be a bit out of her league against runners with faster marathon times, but still picked up the Bronze, with Keitany the odd woman out.  American  Shalane Flanagan looked like she was going to finish an impressive fifth place, before fading in the last three miles to cross the finish line in very respectable tenth.
Just watching these races makes me want to get back in enough shape so that I can at least start shuffling around in some neighborhood 10k.

The lastest issue of Adventure Sports Journal is out, and I have a small contribution with a write up on trail running and hiking on three South Bay trails.  You can read it here.
at August 02, 2012 2 comments: