Back in the day, I religiously kept a running journal. Actually, the information wasn't all that detailed. If I run a track work-out, I would just list the mileage and might note "track work-out" but wouldn't include the length of the track intervals or the times. It's not so much the information one puts into a running journal, but the thought and concentration involved in putting the day's run onto paper that makes a running journal valuable. Well OK, it doesn't take a lot of thought or concentration to write "7" on a piece of paper after running seven miles, but you get the idea. The problem was, every couple of years, I'd lose my notebook, and would have to start the whole process over again.

Sometime in the mid-90's, I ended my daily devotional of running journal entries entirely. A lot of this was simply because I wasn't running much then, and was well on my way to gaining about 50-60 lbs over the next fives years. There was a time I'd blame it all on marrying the wrong woman, who wasn't a big fan of me running, but I think it's fair to say that my first wife probably gave me a well needed break from running seriousness, just not in the right way.

So as to slowly reclaim back the old running life once lived, it's time to start keeping a running journal again. And instead of an old fashioned notebook, I've recently joined DailyMile to record each day of running. It's got a few new fangled features they didn't have back in the day. The most notable is the social networking aspect of the website, where you can have training "friends", and even send your friends motivation, in the form of icons shaped like a blue ribbon or a green thumbs up sign. If you want to send me motivation, well that's nice, but after thirty years with plenty of runs and races under my belt that have gone horribly wrong, countless running injuries of all type and severity, and a few unfortunate incidents involving either end of the digestive system, a green thumbs up icon from out of the blue is not going to make much difference in whether or not I keep at it.

The really neat feature of Daily Mile is their running route mapping feature, leaving no wild guesses as to how far each run is, or how high certain hills are. I've had some fun looking at the online map of my neighborhood, and think, "Hey, what if I ran this course?", then map it out and immediately get a good idea of what I'm getting myself into, rather than finding out the hard way.

For my other hobby, homebrewing, I haven't found the equivalent of Daily Mile, and wouldn't join, even if it existed. Something about quantifying a hobby changes it. By keeping track of miles, times, and workouts, running becomes, at a certain level, a chore, but it's doing those chores that pay off on race day, so I gladly do them. On the other hand, I just simply like brewing beer and sharing those results with friends, end of story. I have great friends who lie to me, always telling me the beer tastes great, whether or not it actually does. And perhaps because the stopwatch is more brutally honest than my friends, I have no real desire to monitor every last beta acid or religiously keep track of the gravity of the beer over the entire process, which would take a lot of fun out of home brewing for me. Maybe some day I'll enter my home brews into competitions and start keeping more detailed notes on my home brews, but right now, developing a repeatable malt extraction process or agonizing over how the judges are going to perceive my homebrews are stresses I'd rather not deal with right now.

So I keep a running journal, and will remain blissfully unaware of metrics needed to improve my homebrews. And unlike my old running journal written in a notebook for my eyes only, my daily workout are now on this blog via some Daily Mile gadget, for the whole world to see. My training is now a wide open book. Is this really progress?
at December 27, 2010 3 comments:

Beer of the Month: Sleigh'r!!! By Ninkasi Brewing!!! 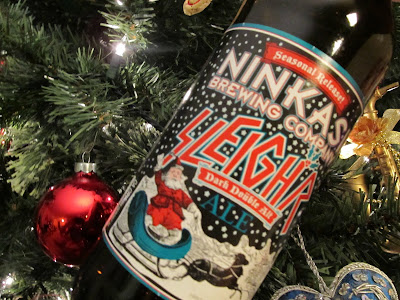 I once bought a Slayer album over twenty years ago back when I was in college. All I could remember about it was a bunch of really fast guitars nearly drowning out some guy yelling about a of bunch of people dying in particularly grisly detail. Metal bands have created some pretty compelling art about universal themes of fear, anger, frustration, and alienation, but I just found all that noise about countless gruesome deaths to be of all things, incredibly boring. I returned the record to the store in exchange for something else.

I certainly understand this personal anecdotal snippet from many years ago is no way to judge a band that's been together for nearly 30 years, but I still consider Slayer to be an interesting cultural curiosity I just don't get. But any band that's been together that long, has achieved status as one of the Big Four of Thrash Metal, and has millions of fans, including critical acclaimed classical violinist Rachel Burton Pine, must be doing a lot of things right. Like being the unlikely inspiration for an excellent Dark Double Alt beer released for the holidays by Ninkasi Brewing.

The beer itself pours a very dark brown, nearly black. As one might expect from its appearance, the first thing that hits you on the tongue is a heavily roasted, slightly smokey malt goodness which is surprisingly smooth and drinkable, despite all that heavy roasting and strong flavors. Then the banana-like esters kick in, solidly asserting themselves just before the a light clove-like aromatic spicy finish. It makes for an easy drinking sipping beer, or a beer that would pair quite well with a lot of strong wintery holiday foods like roasted beef, pork or smoked turkey.

Speaking of the holidays, not only has Slayer inspired a holiday beer, it's also inspired an entire Christmas light show someone created for their Southern California neighborhood my beer blogging buddy Peter Estaniel recently brought to my attention. Make sure you don't miss the flashing Christmas presents next to the electric flowing river of blood.

Perhaps the message here is that holiday good will can come from unlikely places. Maybe we'd have a lot fewer rivers of blood in this world if we did more to accept, seek out and welcome those who might seem strange and out of place, understanding it's these differences which make our world a great place to live. OK, it's a bit of sappy message, but I thought it would seem a lot less sappy cloaked in beer and thrash metal, so just work with me here.

Open It!: Celebrating a little more room in the fridge with Stone Brewing's Old Guardian 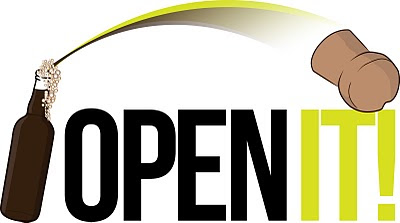 Mark Dredge of Pencil and Spoon has asked us to Open It! and just choose a bottle you’ve been saving for ages, open it and then tell others about it.

I have this small problem with stock piling lots of great beers to be saved for a special occasions. Special occasions happen a lot less often than I find great beers to celebrate it with. And with the finite amount of available space in my refrigerator dwindling down due to the ever increasing collection of beer, my wife Linda tends to remind me in her own special way that unless I want to pour spoiled milk on my breakfast cereal and eat lots of rotten fruits and vegetables, I better do something about reducing my beer collection. And since Linda appreciates good beer as much as I do, sharing a beer with her to celebrate this slight reduction in the beer inventory tends to go a long way in defusing this volatile situation.

And so for the inaugural Open It!, a celebration of drinking great beer for no other reason to enjoy it, we shared a bottle of Stone Brewing's 2010 vintage of their Old Guardian Barleywine. I found the 2009 version, opened shortly after it's release in January of that year, to have a lot of good flavors, but plenty of rough edges that left an unpleasant harshness. And so figured giving the 2010 version 10 months to soften up and mellow out would result in a much better drinking experience than the 2009 version. And yes, waiting those extra months did pay off.

Pouring the amber colored brew into our glasses created a medium-sized frothy foam, which dissipated in a couple minutes, suggesting a rather low malt content for the style. As you would expect from Stone, hops were in abundance both in the aroma and taste. As the initial pour suggested, there was very little caramel and toffee-like malt in this barleywine style to hold back all the piney and grapefruity hops. The 10-month aging worked to the advantage of this brew, as it had much smoother, almost ticklish feeling on the tongue instead of the mouth puckering astringency I recalled from last year's version. Also noticeable was a little alcohol heat. If the bottle didn't say "Barleywine" on it, I'd guess it was an Imperial IPA.

For the next version of Open It!, we'll celebrate reorganizing all my home brewing equipment scattered around our apartment. 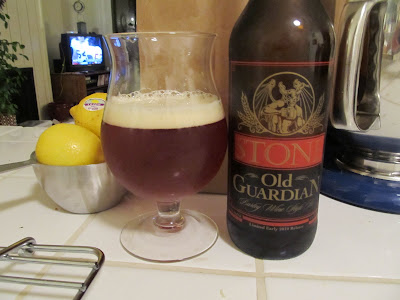 For this month's Session, Mike Lynch of Burgers and Brews discovered on a recent beer trip that "despite all the amazing stops I planned, one of the best experiences was completely accidental". From this experience, he asks us to write about unexpected discoveries in craft beer .

For the biggest jaw dropping, how the &%$# did that get there craft beer experience, I would have to go with the day I dropped into a 7-Eleven in Carlsbad, located just off of Interstate 5 while travelling on business just to get a Diet Coke. To my amazement, to the left of the Diet Cokes were bottles of Alesmith's IPA and Pale Ale. OK, so I wasn't all that far away from Alesmith's brewery in San Diego, but would anyone really expect to walk into the typical roadside 7-Eleven in one of those tired California strip malls and find something from a small, niche' brewery like Alesmith staring in the face behind the glass doors inside the wall-sized beer cooler?

But since that shock nearly two years ago, I've discovered great craft beer in lots of completely unexpected places like dingy dive liquor stores, a zoo, or at an airport in of all places, Salt Lake City as the craft beer industry continues to grow and proliferate. As I thought about this month's Session, what I found really shocking was that craft beer is now in so many shocking places it's no longer shocking.

For further evidence of craft beer's creeping ubiquitousness, where do you think these pictures below were taken? 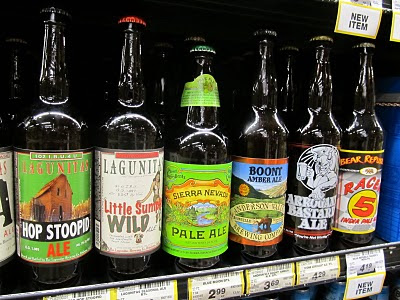 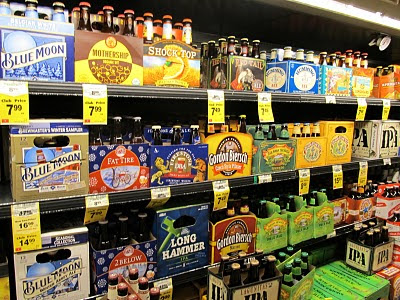 Would you believe at my friendly neighborhood Safeway in Belmont, CA, located on the San Francisco Peninsula? And while I'm fortunate to live in a prime area for craft beer, walk into a nearby grocery store, give the beer selection a careful look and ask yourself, did you expect it to look like this five years ago?