A Great Double IPA Found at an Unlikely Airport 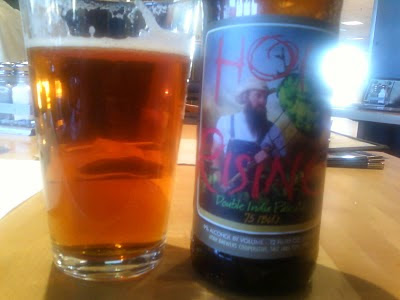 One of life's more fruitless tasks is trying to find new and interesting beers at an airport. Amid the Bud, Bud Lite, Coors, Coors Light strangle hood the big boys have on most cramped airport bars, usually something Sam Adam's Boston Lager or Widmer Hefeweizen can usually be found on tap somewhere. And as a fellow Bay Area blogger found, it's hard to find an IPA in an airport, even when it's located in a city with a great craft brewing community.

Yep, smack dab in the middle of one of the most alcohol adverse states of of the Union is a Squatter's Brewpub at Salt Lake's Airport, and I was fortunate to find their excellent Hop Rising Double IPA there. There's lots of big floral and citrus hop flavors, with a dominant note tangerine in this one. The malt side of the brew held it's own, with a slight caramelly character to it, and at 9% abv, this is an intensely flavorful brew, that isn't overly aggressive or downright assaulting, like too many Double IPA's I've tried.

Don't let anyone tell you there's no good beer to be found in Utah, or in an airport for that matter, either.
at August 19, 2010